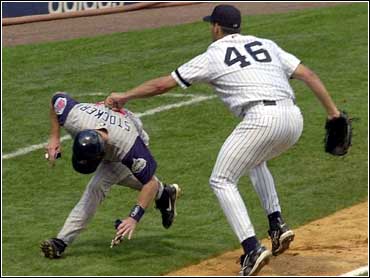 Joe Torre feels the pulse of his team well enough to know that even one of the most difficult losses during his tenure in New York wouldn't have any carry-over effect.

David Justice homered twice and the Yankees backed Andy Pettitte's five-hitter with a record-tying three sacrifice flies in the third inning of a 9-1 win Saturday over the Anaheim Angels.

"It doesn't surprise me," Torre said of his team's resiliency after blowing a five-run lead in the ninth inning Friday. "No question, the loss last night made it very tough for us to go to sleep. But we have a lot of confidence."

The Yankees lost at home after leading by at least five runs in the ninth for only the second time in franchise history.

Anaheim's 9-8 win sparked by Darin Erstad's game-saving catch in the 10th and game-winning homer in the 11th was quickly forgotten as New York scored four runs in the first of Brian Cooper (4-8).

"That was tough for us to take last night," Pettitte said. "Guys were still talking about it today. I wanted to go out and get three quick outs and hoped we would get on the board."

Pettitte (15-6) walked three and struck out six to win his career-high sixth straight start. The left-hander pitched his 17th career complete game and moved into a tie for second in the majors for wins two behind Toronto's David Wells.

Pettitte has been the beneficiary of a powerful offense this season. The Yankees are averaging 7.4 runs when he starts. But lately, New York has ben scoring no matter who is pitching.

The Yankees are an AL-best 29-16 since July 1 to match their season-high mark of 15 games over .500. Pettitte and an offense boosted by the additions of Justice, Glenallen Hill and Jose Canseco have provided much of the difference.

After struggling offensively much of the first half, New York leads the majors with 229 runs since the All-Star break and has 34 homers in its last 17 games.

"It goes in streaks," Torre said. "We have more power here probably than we've ever had in the five years I've been here."

Cooper, recalled from Triple-A Edmonton before the game, gave up a two-run homer to Luis Sojo and RBI singles to Jorge Posada and Scott Brosius in the first. Cooper gave up eight runs six earned

and eight hits in four innings as he lost his fifth straight start.

"You get into a deficit that big it's tough for an offense to come back," Anaheim's Mo Vaughn said. "You look up in the third or fourth inning and its 7-0. You know it's going to be a tough day, especially with Pettitte pitching the way he was throwing."

The Yankees added three runs in the third inning on the record-tying sacrifice flies. A mental and physical error by left fielder Ron Gant made it all possible.

With runners on second and third and no outs, Jorge Posada hit a line drive that hit off Gant's glove for a run-scoring error. Brosius followed with the only traditional sacrifice fly of the inning, when he hit a fly to left, scoring Tino Martinez.

With Posada on second, Clay Bellinger hit a fly to the wall in left. Gant caught it and leaned back on the wall, apparently thinking that was the third out. Posada didn't stop as he raced around third and scored standing.

"He caught the ball flat-footed and I'm sure he lost track of the outs," manager Mike Scioscia said. "It wasn't a pretty play."

It was the third time in major league history that a team had three sacrifice flies in an inning. Oddly, it was the second time the Yankees have done it this year. They did it Jun 29 at Detroit, matching the record set by the Chicago White Sox on July 1, 1962, against Cleveland.

Justice hit solo homers in the fourth and eighth innings, giving him 13 since joining the Yankees on June 29 and 20 career multihomer games.

"It was important for us to come back and play well after that tough loss last night," Justice said. "We did everything right."

Troy Glaus' 36th homer in the eighth was the only run for the Angels. It was the club-record 193rd homer of the season for Anaheim.