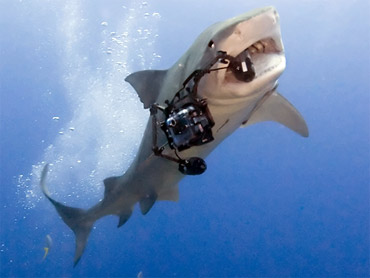 Several British newspapers have run a photo of a tiger shark with a camera in its mouth.

The photo was taken during a diving trip off the Bahamas.

A group of photographers was taking pictures of the sharks back in March when suddenly, one of them appeared to get angry when one photographer got too close, according to Dutch shutterbug Karin Brussaard, who managed to get shots of the encounter on her camera. The shark took the camera right out of the other photographer's hands, Brussaard told the British newspaper The Sun.

"There were about six or seven tiger sharks down there and we couldn't believe our luck," she said. "We were having a great time photographing them all until one diver swam toward one of them trying to get a better shot.

"The shark suddenly seemed to get angry and snatched the camera right out of his hands.

"I couldn't believe it. It swam away with it and we all just looked on in amazement.

"Luckily it did drop it eventually and remarkably, the camera only seemed to have a couple of scratches on it."

Click on the photos above to see Brussaard's pictures.