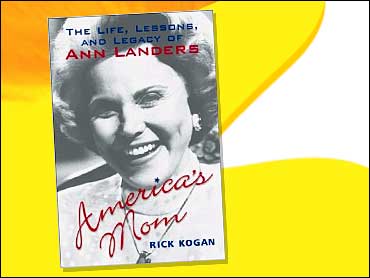 For almost 50 years, millions wrote to Ann Landers to seek advice about everything -- getting along with in-laws, how to break up affairs, what to do about nosy neighbors and the correct way to hang toilet paper.

Most readers say she never failed to give good solid advice. Rick Kogan, Landers' last editor, has written about her remarkable career in his new book, "America's Mom: The Life, Lessons and Legacy of Ann Landers."

Award-winning journalist Kogan tells The Early Show co-anchor Hannah Storm it is the story of Iowa-born "Eppy" and her identical twin sister "Popo," who became known as "Dear Abby."

"Two Jewish girls born on the 4th of July and who go on to become the most famous people, arguably in the world in their time. They were both named the most influential women in the world at various times in the '70s," Kogan says.

The independent housewife, Eppy Lederer, was first hired by the Chicago Sun-Times to take over the daily advice column in 1955. Kogan says, "She came into a business that was basically...on its last legs. Whoever was referring to the papers about cheating husbands or bad kids or parents who didn't understand them was getting the answers: Well, try to move on, dear. All of a sudden, in 1955, here comes this woman with snappy answers, with funny answers."

Her sister followed in her footsteps, creating great sibling rivalry in terms of their columns, something Kogan says, "elevated their celebrity but, at the same time, was heart-breaking."

After a magazine article in which Abby unloaded on her sister, they didn't speak for a number of years, Kogan says, "What warms my heart is near Eppy's last years of her life, they were back together and became these playful little old ladies faxing each other back and forth."

Though a traditional housewife, Landers made a personal matter public when she told her readers her 37-year marriage was over, after finding out her husband was having an affair with a younger woman. It was a move Kogan says could have put her career in peril since she had advised readers to work things out and stay together.

He notes, in 1975, divorce was not the way to go. But before sending him out the door, she brought him clothes and important phone numbers. Kogan says, "He didn't know where the doctor or dry cleaner was. She also stayed with him in a sense helping support him all the way until his death."

Kogan's Lederer memoir was created with the help and support of Ann Landers' colleagues, admirers and friends.