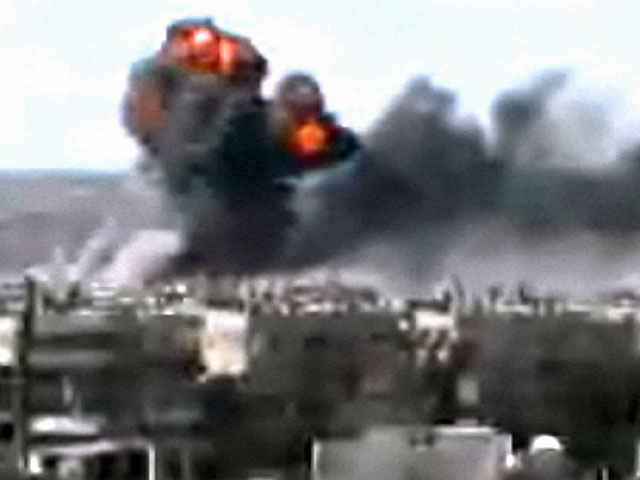 (CBS/AP) BEIRUT - International envoy Kofi Annan said Monday he was "gravely concerned" about the latest violence in Syria, citing shelling of opposition areas in Homs and reports of mortar, helicopter and tank attacks near the coast.

In a statement, Annan said there was an escalation of fighting by government and opposition forces. Violence has spiked in recent weeks, with both sides ignoring a U.N. brokered cease-fire that was supposed to go into effect April 12 but never took hold.

On Monday, activists said Syrian troops attacked a rebel-held town in the center with helicopter gunships and shelled other restive areas across the nation. The aerial assault targeted the strategic river crossing town of Rastan, which has resisted repeated government offensives for months, the activists said.

"The regime is now using helicopters more after its ground troops suffered major losses," said Rami Abdul-Rahman of the Britain-based activist group Syrian Observatory for Human Rights, which uses a network of sources on the ground. "Dozens of (military) vehicles have been destroyed or damaged" since the end of May, he said.

Syrian opposition rallies to a new leader
Rebels battle Syrian forces in Damascus
Video: What options does the U.S. have with Syria?

The Observatory and another activist coalition, the Local Coordination Committees, also reported government shelling in the central provinces of Hama and Homs, where Rastan is located, as well as the southern region of Daraa, the northern province of Aleppo, and suburbs of the capital Damascus and Deir el-Zour in the east.

CBS News correspondent Elizabeth Palmer, reporting from the city of Homs, confirmed that heavy fighting could be heard from the neighborhood of Qaldiya, which is home to one of Syria's largest universities.

Other parts of the city were quiet Monday morning, with many residents staying indoors, Palmer reported.

The LCC said 33 people were killed around the country on Monday. It was impossible to confirm the toll independently.

The Observatory reported at least 24 deaths throughout Syria for the day, including four civilians and an army defector in shelling in the area of Ashara in Deir el-Zour. It said another eight unidentified bodies were discovered nearby. It reported three dead in the Hama shelling, four in Rastan and four near the northern city of Idlib.

The Observatory also said a bomb targeted a security force in the northern city of Idlib, killing seven soldiers and a civilian. There was no immediate confirmation from state media.

In Damascus, the state-run news agency SANA said authorities foiled an attempt to blow up a car rigged with 1,500 pounds of explosives in the Damascus suburb of Chebaa. Experts dismantled it Monday, SANA said.

Syrian activists say 13,000 people have been killed in violence since the uprising began in March 2011.

The bloodshed has led to broad condemnation of the regime from the international community, although Russia, Iran and China have stood by President Bashar Assad. Russia and China have vetoed two Security Council resolutions that threatened sanctions against Syria.

Russia has refused to support any move that could lead to foreign intervention in Syria, Moscow's last significant ally in the Middle East.

Amid the ongoing crisis, British Foreign Secretary William Hague said Monday that the U.K. won't rule out the use of an international military intervention in Syria to end the violence there.

Hague told lawmakers on Monday that Britain was focused on diplomatic efforts, but would "not rule out any other option which could at any stage stop the bloodshed."

He said Syrian President Bashar Assad's regime was "attempting with utter inhumanity to sow terror" among its opponents.

Hague said there was also credible evidence of human rights abuses and sectarian attacks by opposition fighters, and signs that al Qaeda-affiliated groups had carried out attacks "designed to exacerbate the violence."

He urged Russia to use its leverage with Assad, and warned that Moscow's plan for an international conference could risk buying "time for the regime to kill more innocent people."

In Israel, the deputy military chief warned that Syria's large chemical weapons stocks could be trained on the Jewish state. According to Maj. Gen. Yair Naveh, Syria has the largest arsenal of chemical weapons in the world. If the Syrians had the chance, he said, they would "treat us the same way they treat their own people."

Syria has not acknowledged possessing chemical weapons, so the exact size is not known. Among other things, Israel is worried that such weapons could fall into the hands of anti-Israel militants should the regime crumble.

Israel has been watching the carnage in neighboring Syria with increasing concern. The two countries have fought major wars and multiple attempts to reach a peace deal have failed. Syria has strong ties to Iran, Israel's most dangerous enemy, and to Palestinian and Lebanese militants who have fought wars against Israel.

On the other hand, the Israel-Syria border has been mostly quiet for decades under the regimes of Assad and his father.

In Germany, the country's defense minister sharply rejected the idea of military intervention in Syria, referring to those who ask for it as "coffeehouse intellectuals."