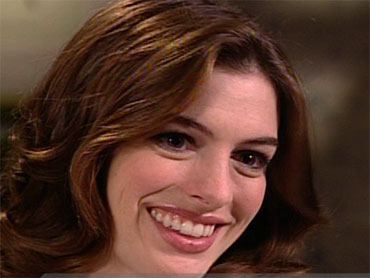 Actress Anne Hathaway is a sweetheart -- in most of her roles, anyway.

From her first big role as a nice teenager in "The Princess Diaries" to playing an ingénue in the backbiting fashion film "Devil Wears Prada," Hathaway knows how to play the good girl.

In recent years, the Academy Award nominated actress has shown her versatility in a variety of different roles, but she's back to being "good."

"Early Show" Special Correspondent and British TV personality Amanda Holden recently sat down with the star to discuss her career and latest role as the Good White Queen in "Alice in Wonderland."

Holden asked Hathaway, "Is it a stretch to have so much goodness in all the roles you play?"

Hathaway laughed and said, "Most people ask that about the bad characters -- that's a stretch. Thank you. Terrible stretch -- I am actually an awful person if you can't tell. Yes, you know I wear white to distract -"

Holden interjected, "And you took the wings off at the door didn't you?"

"Yes, well I had to put them somewhere," Hathaway joked. "This chair is very, very, tiny. It's constantly a problem."

She continued, "You know all the characters (I play) are a stretch. I have yet to find a character that is kind of like me."

In "Alice," Hathaway spends most of her time fighting the evil forces of her sister, the Red Queen of Hearts, played by Helena Bonham Carter.

One of the most noticeable changes for the role is Hathaway's makeup in the film.

Holden remarked, "The makeup is unbelievable. In 'Alice' you have very sort of dark eyebrows and black lips. How much input did you have in your makeup and look? And you look a bit Veronica Lake with your hair. Did you create all that was that something you discussed?

"I figured these were the people so many of the looks I'd loved in his films, so I just kinda wanted them to work their magic on me," she said.

And what's her verdict on the look?

She told Holden, "I was so happy because when they showed me what I looked like I was like gasp I look like the Corpse Bride!"

"I was so thrilled every day to be made in to a Tim Burton heroine," Hathaway said. "It just was a dream come true."

In the role, Hathaway seems to float along -- like she has no legs. Hathaway said the movement was her idea.

She explained, "That was actually born from my absolute joy and enthusiasm of wearing the costume. Because I put it on and I was just kind of prancing about my room and all the sudden I caught a glimpse of the costume in the full-length mirror and I realized that if I walked with very small steps that it didn't look like I was walking at all. It looked like I was gliding."

Then it hit her: "Oh my God," she said, "This is a world without rules -- gravity maybe doesn't apply to her as much."

Hathaway said she was nervous to roll out her character's gliding movements, not telling Burton prior to her first take.

"I didn't have a plan 'B,'" Hathaway said. "And so then, when he said he really liked it, I was just kind of overjoyed and then we were off and running, or floating as it were."

Hathaway performed most of the film's action against a green screen. The exotic lushness of Wonderland was colored in by computer after the movie action was filmed.

Hathaway said she "steeled herself" for working on the green screen set.

Holden quipped, "This is when drama school comes in handy."

But Hathaway said she was "pretty gung-ho" about the entire shoot.

But what about the madness in the film -- does Hathaway think the best people are mad?

She told Holden, "I've got to say, I trust people when they have a bit of madness in them. And it's kind of that wonderful Mae West quote, 'If you don't have something nice to say, come sit by me.' If you're a little mad, come sit by me.'"