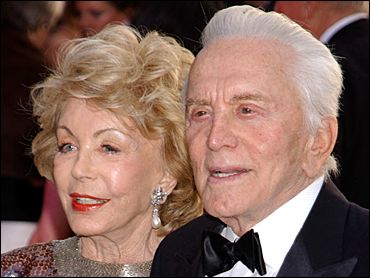 Kirk and Anne Douglas said "I do" for the second time in 50 years at a mansion overlooking downtown Los Angeles, renewing the marriage vows the Hollywood couple first took when they eloped to Las Vegas in 1954.

The elegant, hilltop Gothic landmark is often used as a set for movies and television programs.

As Anne Douglas, 74, walked down the aisle, musicians switched from the first bars of the wedding march to Sammy Cahn's "Love and Marriage."

The star of "Spartacus" and "20,000 Leagues Under the Sea" walked to the rose-adorned chupah, a canopy, to the strains of "I'm in the Mood for Love."

The couple first married on Kirk Douglas' day off while he was filming "20,000 Leagues," said Cowan, who was the best man at that wedding.

"The two met in Paris. She was here on a visa and was about to go back. He didn't want to take a chance of losing her," Cowan said. "So they went to Vegas."

The Douglas' son Peter, his wife and four children attended the ceremony, as did Kirk Douglas' son, producer Joel Douglas, from his first marriage.

His other two sons from his first marriage, actors Eric and Michael Douglas were unable to attend. Michael Douglas was accompanying his wife, Catherine Zeta-Jones, who is filming a new movie in Europe, Cowan said.

Kirk Douglas has appeared in 86 films and won an Oscar for Lifetime Achievement in 1996. His wife is the president of the independent film company Bryna Co., which has produced films such as "Spartacus." The two have long been involved in charity work to help the homeless and improve public schools in Los Angeles.

During the celebration Sunday evening, Douglas sang his wife a song he'd written. The title was a simple request — "Please Stay In Love with Me."