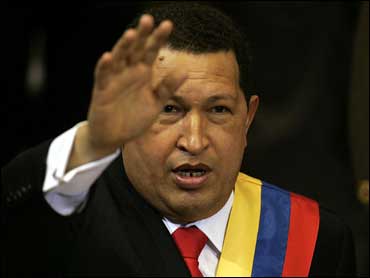 President Hugo Chavez said he could continue governing until 2027 if voters do away with re-election limits because he needs more time in office to establish a socialist economic model in Venezuela.

He has previously said he could stay on as president until 2021 if his proposed constitutional reforms - which among other changes would eliminate presidential term limits, letting him run as many more times as he wants - are approved.

Government opponents have attacked the reforms, accusing Chavez of seeking to stay in power for decades like his close friend Fidel Castro of Cuba. Chavez denies the charges and says a new constitution is necessary to move Venezuela toward socialism and help the country's poor.

"I need more time in the presidency to finish this. We are only beginning," he said Sunday on his weekly radio and television program, "Maybe until 2020 or 2027. I'd be old if I'm still alive."

The reforms were initially approved last week by the National Assembly. Final approval is expected within two or three months, and the changes will then be submitted to voters in a referendum.

In typical style, Chavez spoke for several hours on subjects ranging from Mayan theology to U.S. "imperialism" to advice he received in a recent letter from Castro.

"Don't worry about that solitary gray hair in your black hair," Castro wrote, according to Chavez. "My problem is finding a black one in my white hair."

Though much remains unknown about Castro's health, Chavez has frequently offered general updates since Cuba's 81-year-old leader announced more than a year ago that he had undergone intestinal surgery and was provisionally ceding power to his younger brother Raul.

"We will a find a solution for the humanitarian exchange," he said, "and hopefully we will also find a historic peace agreement."