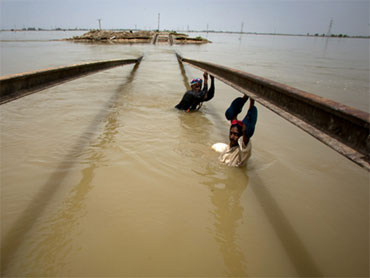 Floodwaters made another break Saturday in the levees protecting a southern Pakistani city, as thousands of residents fled for high ground and left the city nearly empty.

Both sides of the main road were crowded with people from Thatta and nearby flooded villages fleeing the floodwaters. Many had spent the night sleeping out in the open.

Some are heading for nearby towns or cities, he said, with thousands also headed for the high ground of an ancient graveyard for Muslim saints.

He said the latest levee breach, which happened early Saturday, could leave the outskirts of Thatta flooded by later in the day. The city is about 75 miles southeast of the major coastal city of Karachi.

The floods began in the mountainous northwest about a month ago with the onset of monsoon rains and have moved slowly down the country toward the coast in the south, inundating vast swaths of prime agricultural land and damaging or destroying more than 1 million homes.

More than 8 million people are in need of emergency assistance across the country.

The United Nations, the Pakistani army and a host of local and international relief groups have been rushing aid workers, medicine, food and water to the affected regions, but are unable to reach many people.

On Saturday, flood victims blocked a road in Thatta to protest the shortage of aid, most of which is randomly thrown from trucks into crowds of needy people.

"The people who come here to give us food treat us like beggars. They just throw the food. It is humiliating," said 80-year-old Karima, who uses only one name. She was living in the graveyard with more than two dozen relatives.

The floods also displaced thousands of minority Hindus in southern Sindh province. About 3,000 were living at a centuries-old Hindu temple inside the sprawling graveyard.

"I am also fasting and praying for the flood to recede as it has already snatched husbands from wives, sons and daughters from parents, brothers from sisters, and sisters from brothers," said Geeta Bai, 32, as she sat outside the temple.

Pakistan's population is nearly all Muslim.

There were no fatalities in the operation in the city of Peshawar, and the militants surrendered, said Liaqat Ali Khan, a top police official.

He said the trouble began as about three or four militants were being moved inside the offices.

"When they were being shifted from one compound to another, all of a sudden they grabbed guns from one of the guards and opened fire" and took two people hostage, he said.

One guard was injured in the shooting.

That was followed by a 10-hour gunbattle and the operation to free the hostages. Khan would give no details on the operation.