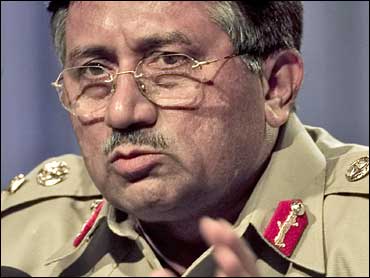 
Pakistan's Supreme Court on Friday dismissed two petitions challenging President Gen. Pervez Musharraf's plan to stand in the Oct. 6 presidential election while continuing in his role as commander of the country's powerful military.

The decision was a long-awaited boost for Musharraf, the pro-U.S. military ruler who has faced mounting protests from opposition parties, lawyers and activists in his south Asian country for several months.

"As per majority of six (votes to) three, the petitions are not maintainable" announced Rana Bhagwandas, head of the nine-member Supreme Court panel which heard the petitions against Musharraf.

Two more petitions are currently being heard. However, legal experts say Musharraf's victory against four court challenges makes it unlikely that and of the pending rulings will go against him.

Tariq Azeem, the government's deputy information minister, immediately welcomed the decision. "We welcome this outcome which confirms our view that there should be no questions to President Musharraf's candidature," he told CBS News in his first comments to a Western news organization.

Opposition leaders and lawyers opposed to Gen. Musharraf criticized the verdict. "We have to see how this verdict came about. We still have our own point of view about General Musharraf," Munir Malik, president of Pakistan's Supreme Court Bar Association, told the privately owned DAWN NEWS TV channel in remarks immediately after the verdict.

Friday's decision clears the way for Musharraf to stand in the election while still holding charge of Pakistan's powerful military, which has ruled the country for more than half its 60 years of existence as an independent state.

Musharraf has functioned as both military commander and chief executive since seizing power in a bloodless 1999 coup. He emerged as a key U.S. ally in the war on terror in 2001, when he turned his back on Afghanistan's Taliban regime shortly after Sept. 11 and chose to side with the Bush administration as it invaded the neighboring country.

Musharraf has since become a prime target for al Qaeda, which has tried to assassinate him on at least three occasions and is widely believed to use the rugged terrain straddling the Pakistan-Afghanistan border as its hub.

Under Musharraf's rule the U.S. has poured in almost $10 billion into Pakistan in economic and military assistance in the past five years alone. However, during this time Pakistan has seen a widening of anti-U.S. sentiment, driven in large part by the public's reaction to such unpopular events as the U.S. invasion of Iraq.

Western diplomats say Musharraf's departure from the political scene could provide impetus to anti-U.S. feelings in his country.

Musharraf's political problems began multiplying when he suspended Iftikhar Mohammad Chaudhary, Chief Justice of the Supreme Court, in March this year on vague charges of misconduct. Chaudhary campaigned to be restored to office, quickly gaining widespread support from the Pakistani public and a large lawyers' movement from the country's justice system. Their motivation was as much anti-Musharraf as it was pro-Chaudhary, if not more so.

Chaudhary was restored to his position at the top of the court in a landmark verdict in July this year, which was seen as a significant setback to Musharraf's grip on power in Pakistan.

Earlier this month, Musharraf's lawyer told the Supreme Court that the president would retire from the military by November 15, continuing thereafter only as a civilian head of state.

For Musharraf, Friday's victory in the high court will help solidify his plan to run for reelection as president, analysts said.

This follows concerns last month from analysts who warned that the ruling Pakistan Muslim League, Quaid e Azam (PML-Q), may witness internal divisions and growing opposition to Musharraf's reelection in the event that he retires from the military ahead of the vote - a move that could potentially reduce his clout.

Retaining hold over the PML-Q was all the more important for Musharraf as the electoral college for the presidential election consists of Pakistan's federal parliament and its four provincial legislatures. Members of parliament from all the legislatures will vote for the new president in October.

Sher Afgan Niazi, Minister for Law and Parliamentary Affairs, said this week that he expects President Musharraf to receive at least 60 percent of the votes.

Farhan Bokhari has been covering southeast Asia for several large European news organizations for 16 years. Based in Islamabad, his focus is security issues, in particular al Qaeda and the regional aspects of the global fight against terrorism.