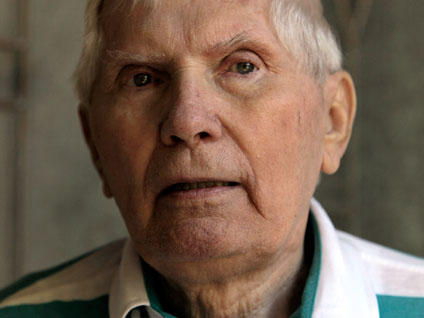 Antigua and Barbuda's prime minister said Saturday that he may have been in danger while sniper suspect John Allen Muhammad was living in the Caribbean country.

Prime Minister Lester Bird cited a government task force's report on Muhammad's activities in Antigua, portions of which were released Saturday. Bird said he was "deeply troubled" by an unreleased part.

"I have been informed that my own safety may have been at risk," he said. "These matters, I understand, will be addressed in the task force's final report," due to be released in six weeks.

Government officials did not provide additional details of what the risk was.

The four-member task force also determined that Muhammad - who arrived in Antigua in 2000 - illegally acquired an Antiguan passport and that officials were negligent in approving the U.S. citizen's application.

The task force found evidence that he used a falsified Louisiana birth certificate to acquire a passport in Antigua and Barbuda, Attorney General Gertel Thom said.

"There is no evidence of any criminal collusion with anyone in the passport office," the report said.

To get his Antiguan passport in 2000, Muhammad presented a falsified birth certificate from New Orleans, claiming his mother was Eva Ferris of Antigua, officials said. But Eva Ferris' family said she was not related to Muhammad.

Muhammad, 41, a U.S. Army veteran, lived in the Caribbean country with his three children starting in 2000 and met the other sniper suspect, 17-year-old John Lee Malvo, there in 2001, Thom said.

Muhammad's name before he converted to Islam was John Allen Williams.

In the United States, authorities linked yet another shooting to the sniper suspects Friday - the wounding of a Maryland store clerk more than two weeks before a string of attacks began terrorizing the Washington area.

The two men have now been blamed for shooting 17 people, killing 12 and wounding five in Alabama, Louisiana and around the nation's capital. No one was hit in another shooting that damaged a craft store window.

Maryland investigators told The New York Times that they think sniper suspect Malvo, 17, wrote the three notes found at the scenes of sniper shootings in the Washington vicinity.

Officials said they believe that Malvo also made at least two of the four telephone calls that came from the suspects to law enforcement officials during the attacks, the Times reports in its Saturday editions.

In the most recently linked shooting, a clerk was wounded outside a liquor store in Silver Spring, Maryland, Sept. 14.

Ballistics tests on a bullet fragment were inconclusive; the link was based on witness accounts, similarity of circumstances and evidence putting the suspects' vehicle in the area the day of the shooting, said Montgomery County police spokesman Derek Baliles.

A week after that shooting, authorities say Muhammad, 41, and Malvo had moved on to Montgomery, Alabama, where they are accused of killing one woman and wounding another outside a liquor store.

Alabama authorities said Thursday that the same rifle used in the sniper shootings, a .223-caliber Bushmaster, had been linked to the Montgomery case.

A stolen handgun has been found near the scene of the Montgomery shootings, which helped police zero in on Muhammad and Malvo. Police Chief John Wilson said the gun fits the make and model of a weapon believed used in the shootings.

Wilson said the gun, stolen July 20 at an El Paso, Texas, gun show, will be tested to determine if it is connected.

Two days after the Alabama slaying and 315 miles away, on Sept. 23, the men allegedly shot and killed a woman in Baton Rouge, Louisiana, outside a beauty supply store.

Baton Rouge Police Chief Pat Englade has issued first-degree murder warrants for Muhammad and Malvo after ballistics tests matched the rifle used in the sniper shootings to the shooting of Hong Im Ballenger, 45.

Ballenger died from a single shot to the head as she left the Beauty Depot. Witnesses said the gunman was a young black man who fled into a nearby park and evaded bloodhounds called in to track him down.

According to the arrest warrant, police believe Muhammad shot the woman and Malvo stole her purse.

The moment Jim Ballenger saw the photo of accused snipers Muhammad and Malvo, he says he knew they had to be his wife's killers, but police ignored his hunch.

Ballenger told CBS News correspondent Bob McNamara, "They said it didn't fit the M.O. He said they're over there in Washington. I said no they were over here. Crime stoppers didn't believe me, so I called the FBI and the FBI says we're gonna look into it for you."

The men are also suspects in a February killing in Washington state.

In the Silver Spring shooting, Rupinder Oberoi, 22, was hit in the back outside the Hillandale Beer and Wine where he worked. He spent a week in the hospital before being released and is expected to fully recover.

In an interview last month, Oberoi said he thought he was a victim of the sniper as soon as he heard about the Washington-area shootings. "I thought, this is linked to me, the same kind of shooting, one shot and nobody saw anything ... people who are innocent, no motive."

His father, Manmohan Oberoi, said his family was disappointed because they felt police had not aggressively investigated the shooting when it happened.

"If it was investigated well, maybe they would've had 18 precious days on their hands to catch the assailants before they struck again," he said.

No charges have been filed in the shooting. Montgomery County State's Attorney Douglas Gansler said they would add the incident to their list of charges if they get the jurisdiction.

Maryland authorities disclosed to the Times they have tentatively concluded that handwriting on the three notes found at sniper crime scenes— one on a tarot card and two on sheets of paper — matches that on assignments that Malvo wrote at Bellingham High School in Washington State. Federal officials said the FBI was still conducting handwriting analysis and had not yet reached a formal conclusion, the Times reports.

The calls and notes, investigators explained to the newspaper, will be crucial in determining potential motives and gleaning details on the relationship between Malvo and Muhammad, who was initially presumed to have taken the lead in all aspects of the attacks.

Muhammad and Malvo were found sleeping in a 1990 Chevrolet Caprice when they were arrested Oct. 24. Authorities found the rifle in their car, which they say was modified so someone could fire unseen through a hole in the trunk.

They face multiple state and federal counts in the sniper spree in Maryland, Virginia and Washington, D.C, as well as the deaths of two women in Alabama and Louisiana.

In Washington, Attorney General John Ashcroft said the investigation was continuing into the possibility other people may be involved or that the suspects may have committed more crimes.

"We will proceed deliberatively, cautiously and not jump to any conclusions," Ashcroft said.

A senior Justice Department official, speaking on condition of anonymity, said there was no specific evidence showing others were involved but authorities would not rule out the possibility.

Police nationwide are checking unsolved crimes for links to the sniper suspects, the official said, with a particular focus on the Gulf Coast and East Coast.