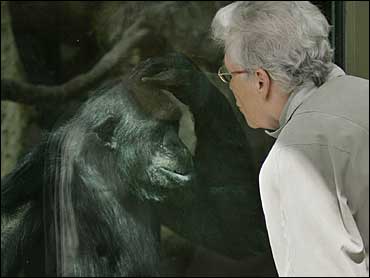 We all know not to feed the animals that when visiting the zoo. Now the Antwerp Zoo has urged visitors to, please, stop staring at the chimpanzees.

A new set of rules was posted outside the chimp enclosure at the city zoo urging visitors, especially regular daily ones, not to form a bond with a particular male chimp named "Cheetah." He was raised by humans but is now trying to forge a social bond with the other seven apes at the animal park, a zoo official said Wednesday.

"We ask, we inform our daily visitors and other visitors that one of the monkeys is particularly open for human contact," zoo spokeswoman Ilse Segers told Associated Press Television. "He is raised by humans in a family and therefore we are trying to integrate him, to try to get more social integration with the group."

She said that Cheetah's continued interaction with humans was "delaying the social integration of the animal in the group," and isolating the ape from the others.

A sign posted on the glass enclosure requests onlookers not to stare at the apes. "Look away when an animal seeks to make contact with you, or take a step back," said the sign. "Some individuals are more interested with visitors than their own kind."

Segers said the zoo was not barring visitors from looking at the chimps altogether. "Of course eye contact is not forbidden. We have more than one million visitors a year and of course they are very welcome still to have a look at the animals."

The 164-year old Antwerp Zoo is one of the oldest animal parks in Europe, and attracts around 1.3 million visitors a year.

Trump's lawyers sent a cease-and-desist letter to the RNC demanding that it not use him in their fundraising pitches.