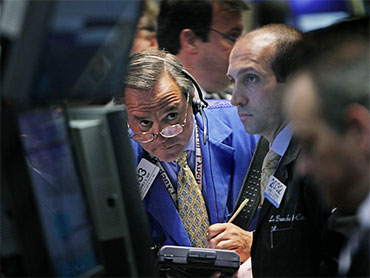 Stocks fell by the sharpest amount in six weeks and Treasury prices soared Monday as investors around the world feared that consumers are too anxious to spend the economy into recovery. The losses on stock exchanges extended the heavy selling that began Friday with a disappointing reading on consumer confidence. And bond investors, once again searching for a safe investment, bought heavily into Treasurys.

Stocks slid across all industries as investors worried that consumers' reluctance to spend will hurt corporate earnings. Many companies' second-quarter results were boosted by cost-cutting, not higher sales, and the fear is that without a pickup in sales, earnings will fall.

While other parts of the economy, including housing and manufacturing, are showing signs of progress, the country cannot have a strong recovery unless consumers are spending more freely. Their spending accounts for more than two-thirds of U.S. economic activity.

The market's reaction to news of a reluctant consumer had many questioning whether a five-month rally was way too optimistic. At its recent high the S&P 500 index had climbed almost 50 percent from a 12-year low in early March.

Joe Saluzzi, co-head of equity trading at Themis Trading LLC, said the market had risen too far and that the selling was warranted.

"The economics obviously don't support where we've been," he said.

Other analysts were more upbeat, saying some retreat was to be expected.

"We have come an awful long way. To not expect a sell-off after the degree of increase - I think you're dreaming," said John Merrill, chief investment officer of Tanglewood Wealth Management in Houston.

It was the biggest drop for major stock indexes since July 2, when a weak employment report fanned worries about the economy. The indexes fell more than 2.5 percent.

About 2,700 stocks fell while only 315 rose on the New York Stock Exchange, where volume came to 655.1 million shares compared with 594 million shares traded Friday.

Meanwhile, the yield on the benchmark 10-year Treasury note, which moves opposite its price, fell to 3.49 percent from 3.57 percent late Friday.

Overseas, China's main market fell 5.8 percent as investors worried that stocks had risen too quickly and the government would tighten bank lending policies. Japan's Nikkei stock average fell 3.1 percent as investors weren't satisfied by news that the country had emerged from recession in the second quarter.

The mixed economic readings of the past several months aren't surprising. A turnaround produces mixed messages because not all parts of the economy recover at the same speed and some indicators start to show life before others.

Analysts say investors who had expected the economy would rocket higher got ahead of themselves by sending stocks up so quickly. Many economists have predicted a gradual recovery in the economy, in part because unemployment rates could remain high.

Investors are worried about consumers and unemployment because that could make it harder for the economy to return to growth. In downturns over the past 60 years, the S&P 500 index has hit bottom on average four months before a recession ended and about nine months before unemployment reached its peak.

Oil prices also extended their losses, reflecting the growing concerns about a weak economy that will curtail demand for energy. A barrel of crude oil fell $1.39 to $66.12 a barrel on the New York Mercantile Exchange.

The dollar rose against other major currencies, while gold prices fell.