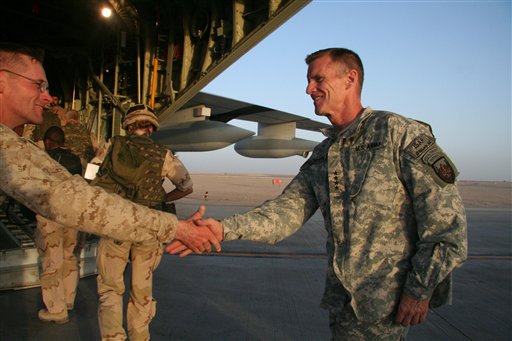 Rampant government corruption may derail the fight against the Taliban and al-Qaida in Afghanistan even if as many as 80,000 additional U.S. troops are sent to the war, the top military commander there has concluded, according to U.S. officials briefed on his recommendations.

The conclusion by Army Gen. Stanley McChrystal is part of a still-secret document that requests more troops even as he warns that they ultimately may not prevent terrorists from turning Afghanistan back into a haven.

McChrystal has outlined three options for additional troops _ from as many as 80,000 to as few as 10,000 to 15,000, according to officials at the Pentagon and White House.

Each option carries a high risk of failing, according to U.S. officials, although they said McChrystal concluded that fewer troops will bring the highest risks.

McChrystal favors a compromise of 40,000 additional troops, said the officials, who described his request to The Associated Press on condition of anonymity because they were not authorized to discuss it publicly.

President Barack Obama said Tuesday that he will decide on a war strategy and the troops needed to carry it out in "the coming weeks." Though he said weighing military and security concerns are key parts of his decision, "another element is making sure we're doing a good job in building capacity on the civilian side."

"Our principal goal remains: Root out al-Qaida and its extremist allies that can launch attacks against the United States or its allies," the president said.

There are 67,000 American troops in Afghanistan, and 1,000 more are headed there by the end of December.

Allegations of widespread fraud in Afghanistan's Aug. 20 presidential election threaten to scuttle the international strategy to combat the burgeoning Taliban insurgency. The elections were marred by claims of ballot box stuffing and voter coercion, and officials now are recounting a sample of 10 percent of ballot boxes from 3,063 polling stations with suspect results.

A decision on whether to hold a runoff election between Afghanistan President Hamid Karzai and chief challenger Abdullah Abdullah, a former Afghan foreign minister, could come as early as Saturday.

Corruption can lead to citizens rejecting their government and, in some cases, aligning with rebel or insurgent groups. That in turn creates chaos that can lead to security problems and long-term instability.

Sending in additional troops would help secure Afghanistan, but only in the short term, said Jay Parker, a Georgetown University foreign service professor and retired Army colonel. Troops alone can't fix the corruption, the root of the problem, he said.

Now in its eighth year, the war in Afghanistan has been increasingly deadly for NATO forces and faces waning public support in the United States and allied nations. Obama has vowed to disrupt al-Qaida, the terrorist group behind the Sept. 11 attacks, whose leaders are believed to be hiding in Pakistan's mountainous border region with Afghanistan.

Some of Obama's top advisers, chief among them Vice President Joe Biden, want to target al-Qaida with missile-carrying unmanned spy planes and U.S. special forces strikes in Pakistan. But military officials and some diplomats argue that U.S. troops must continue to curb the extremist Taliban's influence in Afghanistan to prevent future alliances with al-Qaida.

McChrystal last month delivered his request for troops to top military leaders who handed it off to Defense Secretary Robert Gates. Gates gave it to Obama days later.

The additional forces would not be deployed until early next year at the soonest, and it is not clear how they would be compiled. Two U.S. officials cited a range of sending between four and eight military brigades, which would mean a mix of Army and Marine units.

An Army brigade generally has between 3,500 and 5,000 soldiers, while a Marine expeditinary brigade could be built up to about 17,000 troops. However, sending a high number of forces would put more stress on troops who are already stretched thin from fighting in Afghanistan and Iraq, and likely would reduce the time they would get at home between deployments.