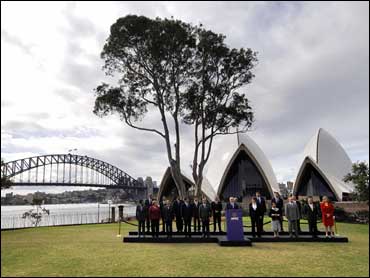 Pacific Rim leaders on Sunday pledged political will and flexibility to advance faltering global trade talks as a matter of urgency, after striking an agreement on climate change they hope will influence a new global strategy on the problem.

Wrapping up an annual summit, the leaders of 21 Asia-Pacific economies said breaking a deadlock over trade in agricultural and manufactured goods was vital to saving the current trade negotiations.

"There has never been a more urgent need to make progress" in the World Trade Organization talks, said the leaders of the Asia-Pacific Economic Cooperation forum, whose economies account for nearly half of world trade.

"We pledge the political will, flexibility and ambition to ensure the Doha Round negotiations enter their final phase this year," the leaders said in a statement. "We call on our WTO partners to join in this vital effort."

Most of the leaders then headed home from their two days of talks — the culmination of a week of consultations among senior officials and hobnobbing and round-robin diplomacy among the leaders.

Addressing a major political issue back home, Japanese Prime Minister Shinzo Abe on Sunday said he was ready to resign if parliament fails to extend Japan's refueling mission in the Indian Ocean in support of U.S.-led anti-terrorism operations in Afghanistan.

There was a minor security scare Sunday when a small civilian plane flew toward air space over Sydney that was subject to special restrictions because of APEC. FA-18 fighters intercepted the plane and escorted it to land at an airport on the city's outskirts, government agencies said.

Howard claimed success Sunday for the summit's centerpiece agreement on climate change. The agreement, he said, on two nonbinding goals — on improving energy efficiency and increasing forest cover — were important steps toward building a new international consensus for tackling the problem.

"No one meeting, no one agreement is going to fix this issue," Howard said at the summit's final press conference, but the declaration was "a very significant step" in the debate.

The APEC program does not set targets on the greenhouse gas emissions that cause global warming, unlike the U.N.-backed Kyoto Protocol.

Instead, APEC members will reduce "energy intensity" — the amount of energy needed to produce a dollar of gross domestic product — 25 percent by 2030. They pledged to increase forest cover in the region by at least 50 million acres by 2020.

Though environmental activists and some climate change experts dismissed the agreement as too timid, supporters said the significance lay in getting APEC's diverse grouping to agree to common goals.

APEC contains four of the world's biggest polluters — the United States, China, Russia and Japan. So the agreement may influence upcoming talks in Washington, New York and Indonesia on a new climate change blueprint to replace Kyoto, which expires in 2012.

On trade, Howard said the so-called Doha round of negotiations represents "the last best hope for an aggregate multilateral trade agreement."

Negotiations resumed in Geneva last week on two new proposals to break a deadlock between rich and poor nations over how much to cut barriers in agricultural and industrial trade. APEC leaders said early progress on these issues is needed to ensure the talks succeed.

A successful global trade deal would "deliver new trade flows for the benefit of all, including developing countries," the leaders said, adding their strong backing for a rules-based, global trading system.

But some were already expressing doubt the statement would be much help in the process.

"I find it very difficult to be optimistic over the conclusion of the Doha round simply because ... the major powers, the United States, Japan and France, are not sufficiently flexible," Malaysian Prime Minister Abdullah Ahmad Badawi told reporters after the summit broke up.

The Pacific Rim leaders also said they will continue to examine a proposal to create a Pacific-wide free-trade zone that would stretch from China to Chile and include all APEC members.

APEC leaders said the grouping would not consider admitting new members before 2010, leaving India and 11 other countries who have applied waiting.