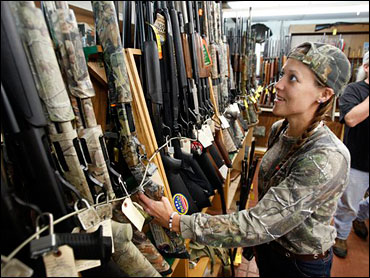 (AP Photo/Steve Helber)
A federal appeals court in San Francisco on Thursday will confront America's next big gun rights question: Whether or not the Second Amendment prevents state governments from enacting anti-gun laws.

The U.S. Ninth Circuit Court of Appeals will hear oral arguments in a case that's likely to decide whether the Bill of Rights' guarantee of a right to "keep and bear arms" restricts only the federal government and the District of Columbia -- the current state of affairs -- or whether it can be invoked to strike down intrusive state and local laws too.

In an earlier ruling in April, a three-judge panel of the same court ruled that the Second Amendment did apply to the states, a different outcome than appeals courts in Chicago and New York had reached. On Thursday morning, a larger Ninth Circuit panel is scheduled to re-hear the case, meaning the earlier decision in Nordyke v. King could be upheld or rejected.

The applying-to-the-states question may seem like an odd one: After all, the First Amendment starts out by saying "Congress shall make no law," but the Supreme Court has interpreted that language to prevent states (and even state universities) from suppressing political speech. The Fourth Amendment has been interpreted to restrict state police from conducting "unreasonable searches," and while the right to an abortion is not clearly found anywhere in the U.S. Constitution, the 1973 Roe v. Wade decision struck down a Texas law on constitutional grounds.

So if much of the rest of the Bill of Rights applies to state governments -- a concept called "incorporation" -- why not the Second Amendment as well?

This topic sounds a bit like one that only a law professor might appreciate, but in the last 60 years or so, the Supreme Court has ruled that only "fundamental" rights in the Bill of Rights are incorporated. If a right is not deemed "fundamental," it doesn't apply to the states. So far, the justices have not yet ruled squarely on this question (even though Justice Scalia's majority opinion in last year's D.C. v. Heller case noted that "the right to have arms had become fundamental" in the early American colonies).

The incorporation question is already bubbling up to the Supreme Court thanks to the National Rifle Association v. Chicago and McDonald v. Chicago cases and the New York Maloney v. Rice case. On September 29, the justices will meet to decide whether to accept those cases for the 2009-2010 term; those appeals courts declined to apply the Second Amendment to state laws.

Of course, even if the Supreme Court eventually agrees that gun rights are "fundamental" and apply to individual states, that may not mean very much in practice.

The Ninth Circuit incorporated the Second Amendment but still upheld an Alameda County, Calif. ban on firearms on county property, including the fairgrounds. And the Seventh Circuit recently ruled that even if the Second Amendment applied to municipalities, they could get away with forcing citizens to register firearms or face legal consequences. In other words, courts could uphold the right to keep and bears arms in form and in theory, but ignore it in practice.