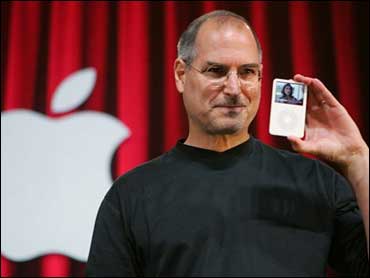 Citing unnamed people familiar with the matter, the British newspaper Financial Times reported late Wednesday that federal investigators were looking into evidence of the falsification of records that purported Jobs' options were approved by a full board.

In October, Apple said its own internal probe had found no misconduct by any current officers and largely exonerated Jobs of any wrongdoing. But financial analysts, along with Wall Street, have shrugged off the story, seeing little impact as long as Jobs, Apple's iconic and charismatic executive, remained unscathed.

The media reports Wednesday revealed new details of the situation.

Earlier in the day, a legal publication that detailed the possible forgery also reported that Jobs has hired his own attorneys outside of the company's legal team to represent him in the investigation.

That report sent shares of the iPod and Macintosh computer maker on a roller-coaster ride in trading Wednesday, falling almost 5 percent before rebounding to close at $81.52, up a penny, on the Nasdaq Stock Market.

"Investors seem to be reacting to the mention of Steve Jobs," Reitzes said in his note. "We believe it could make sense to obtain counsel given his immense personal fortune and influence."

The Recorder, a San Francisco-based publication owned by American Lawyer Media, reported late Tuesday that federal prosecutors were looking into forged documents at Apple related to administering stock options. The report cited people with knowledge of the case who requested anonymity because the case is the subject of criminal and civil government investigations.

Apple spokesman Steve Dowling said the company is providing the Securities and Exchange Commission with the results of its internal investigation into its stock options granting practices, but had no further comment Wednesday.

In October, Apple said the internal investigation found no misconduct by any current officers but raised concerns about how two former officers recorded and accounted for stock options. Citing people with knowledge of the investigation, The Recorder also reported those two former officers were General Counsel Nancy Heinen and Chief Financial Officer Fred Anderson.

Anderson retired as Apple's CFO in 2004 yet remained a board member until he resigned in October after the internal inquiry. Heinen left Apple for unknown reasons in the spring, before Apple initiated its stock options probe in June.

Apple said the probe found accounting "irregularities" that occurred between 1997 and 2002. The troublesome awards included millions of options given to Jobs, though he subsequently surrendered the awards in 2003.

Echoing other analysts who have said they do not believe Jobs' position will be affected by the scandal, Piper Jaffray analyst Gene Munster said Wednesday he remains convinced that Jobs was not involved in any wrongdoing.

"Apple has issues with stock options but I don't think it matters unless Steve Jobs is impacted," Munster said. "I think Wall Street could care less about this. They've already got two fall people — Nancy and Fred — and what it comes down to for investors is how many iPods they sold in the December quarter."

On Dec. 15, Apple said it was delaying filing its annual report with the Securities and Exchange Commission due to its ongoing investigation into stock option grants. In a filing with the SEC, the company said it needs to restate historical financial statements to record charges for compensation related to past grants. As a result, Apple was unable to file its 10-K Form for the fiscal year ended Sept. 30 by the required filing date of Dec. 14.

Apple expects to file its annual report and its quarterly report for the period ending July 1 by Friday.