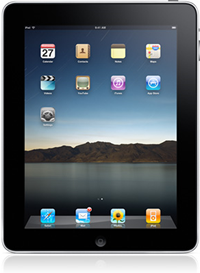 Apple's iPad tablet computer goes on sale at the end of this month in nine countries outside of the United States.

After demand in the U.S. was found to be greater than expected, Apple delayed its global roll out of the iPad last month. So far, the company says that it has sold more than one million units. (Bloomberg is reporting Apple retail stores in 13 U.S. cities have sold out of all three versions of the iPad 3G, which went on sale last week.) The company announced earlier today that the iPad will become available in Australia, Canada, France, Germany, Italy, Japan, Spain, Switzerland, and the U.K. while preordering starts Monday. Apple has not yet announced pricing, though that should be disclosed next week. Another nine countries - Austria, Belgium, Hong Kong, Ireland, Luxembourg, Mexico, Netherlands, New Zealand and Singapore - will be next in line.

"My condolences to those of you in countries not yet listed," punned John Gruber, who writes a popular technology blog.

Separately, IDC said that shipments of Apple's iPhone soared more than 131% during the first quarter of the year. Some 8.8 million iPhones went out the door in the first three months of 2010, compared with 3.8 million in the same period a year earlier, according to IDC. That put Apple in third place in the smartphone market with 16.1% share of the market behind first place Nokia, which leads with 39.3% and No. 2 Research in Motion with 19.4%.