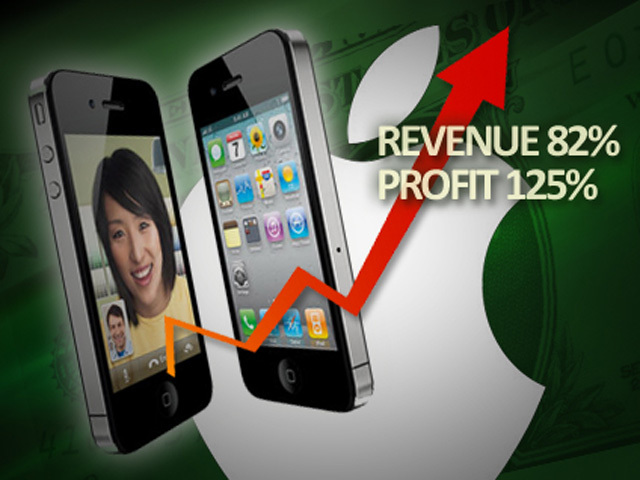 Apple more than doubled its earnings in its fiscal third quarter on the strength of triple-digit sales of its iPhone and iPad product lines.

The company, which posted its numbers after the close of trading on Wall Street Tuesday afternoon, earned $7.31 billion, or $7.79 per diluted share, on revenues of $28.6 billion. That's up sharply from a year ago during the same period when Apple earned $3.3 billion, or or $3.51 per share, on $15.7 billion in sales.

Apple also said that its gross profit margins climbed to 41.7 percent compared to 39.1 percent in the year-ago quarter. That higher number reflected growing appetite for iPhones, according to Apple.

"We're thrilled to deliver our best quarter ever, with revenue up 82 percent and profits up 125 percent," said Steve Jobs, Apple's CEO in a statement. "Right now, we're very focused and excited about bringing iOS 5 and iCloud to our users this fall."

Investors were similarly thrilled with the results, sending Apple's stock up more than 7 percent in after-hours trading. While the bottom-line numbers were spectacular from every conceivable angle, keep in mind, though, that Apple also plays a wink-wink game with a willing Wall Street audience each quarter. For years, executives on Apple's quarterly conference calls have downplayed future sales estimates, offering conservative guidance - even though analysts who follow the company know that the company's low-balling its estimates. That only multiplies the fury of bullishness which greets the publication of results which then inevitably beat the estimates.

So it was that on a conference call Tuesday afternoon to discuss its earnings, Apple offered a relatively conservative fiscal fourth-quarter outlook with estimated earnings of $5.50 a share and revenue of $25 billion. Pressed by analysts, Apple said that the lower number reflected "future product transition" - in other words, undisclosed new products, which, naturally, Apple never talks about until the official launch day.

Still, it was one heck of a quarter. The highlights included the following year-over-year comparisons for its various product lines:

One interesting nugget on the call: Apple says that many customers who previously might have bought Macs are instead opting for iPads. Another reason is that they've been waiting for the latest Mac operating system, called OS X Lion, which officially debuts on Wednesday.

Another outstanding performer was the company's retail network. Despite an otherwise drab retail environment, Apple's 327 retail stores accounted for $3.5 billion in sales, compared with $2.6 billion, a 36% year-over-year increase. On the conference call, CFO Peter Oppenheimer said Apple planned to open 30 new stores in the September quarter, including one in Hong Kong.

It was perhaps happenstance but the earnings results came as the Wall Street Journal reported that some Apple board members have informally held discussions with recruiters about a CEO succession plan. Steve Jobs.has been on medical leave since the early winter for an unspecified ailment.