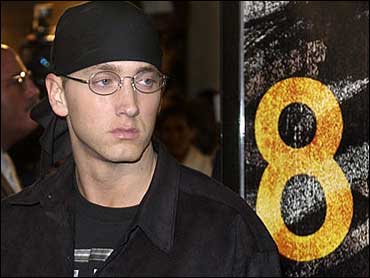 Rapper Eminem's music publisher is suing Apple Computer Inc., claiming the company used one of the hip-hop star's songs in a television advertisement without permission.

At issue is an ad for Apple's iTunes pay-per-download music software, in which a 10-year-old sings Eminem's "Lose Yourself." The suit claims the commercial aired on MTV beginning in July 2003 and ran numerous times for at least three months. It also appeared on Apple's Web site.

"Eminem has never nationally endorsed any commercial products and ... even if he were interested in endorsing a product, any endorsement deal would require a significant amount of money, possibly in excess of $10 million," according to the 15-page lawsuit filed Friday in U.S. District Court in Detroit.

Eminem responded by ending discussions with Apple, according to the suit.

Eminem, 31, whose legal name is Marshall Bruce Mathers III, grew up in Detroit and several of its blue-collar suburbs. He has sold more than 33 million records, according to industry estimates.

CBSNews.com and MTV are part of Viacom, Inc.