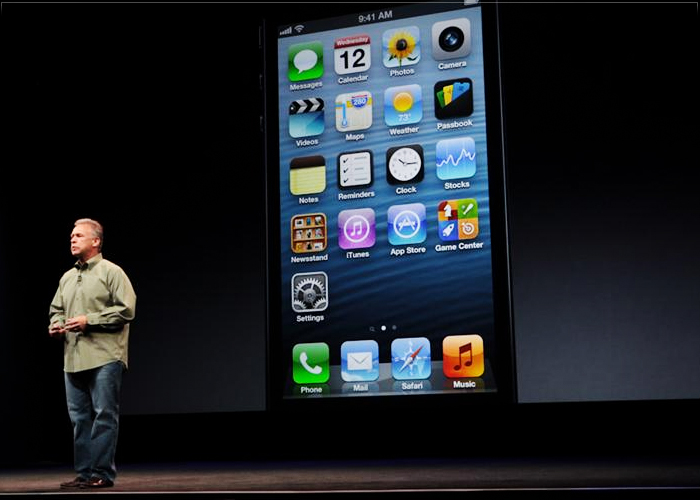 (AP) NEW YORK - Apple (AAPL) on Wednesday unveiled the iPhone 5, and says it's thinner and lighter than the previous model, even though it has a bigger screen.

The other launch countries are Australia, Canada, France, Germany, Hong Kong, Japan, Singapore and the UK.

A week later, the phone will be available in 22 more countries, including Italy, Poland and Spain.

Are Apple's rivals planning a nasty surprise?
3 reasons Apple needs a revolutionary iPhone 5
Upgrading iPhones? What to do with the old model

The phone is thinner and ligher than the iPhone 4S, yet has a taller screen, as expected. That means another row of icons will fit on the screen.

The iPhone 5 is the year's most eagerly awaited phone launch, and analysts expect Apple to sell tens of millions of units before the year is out.

The phone will cost the same as the iPhone 4S did when it debuted, starting at $199 with a two-year contract in the U.S. Meanwhile, the price for the iPhone 4S will drop to $99 for new contract signers, and the iPhone 4 will be free.

The iPhone 5 will come with the capability to connect to the fastest new wireless data networks, both in the U.S. and overseas. That's another feature that was widely expected. Some competing phones in the U.S. have had this ability for a year and an half.

Samsung Electronics Co. benefited from having its S III out in the U.S. in June, while Apple was still selling an iPhone model it released last October. The new iPhone will allow Apple to recapture the attention and the revenue. Analysts are already estimating that Apple will sell 8 million to 10 million iPhone 5s before the company's quarter ends Sept. 30.

That said, the iPhone has been trailing Android phones in sales. On Tuesday, Google executive Hugo Barra declared on his Google Plus social networking page that 1.3 million Android phones are added each day, with 500 million devices activated globally. As of June, Apple has sold 244 million iPhones since the first one came out in 2007.

With the new model, Apple is ditching the connection port it's used for iPods, iPhones and iPads for nearly a decade in favor of a smaller, narrower one. That means Apple is still the holdout in an industry where other manufacturers have settled on a standard connector for charging and computer backups.

There will be adapters available so that the new phone will be able to connect to sound docks and other accessories designed for the old phones.

Thanks to new technology that eliminates a separate touch-sensing layer in the screen, the phone is 18 percent thinner and 20 percent lighter, said Apple marketing head Phil Schiller. He spoke at an Apple event in San Francisco.

The camera on the back of the iPhone 5 has the same resolution as the one on the iPhone 4S, but takes pictures faster and works better in low light, Apple said.

The front-facing camera is getting an upgrade to high-definition, letting users take advantage of the faster data networks for videoconferencing.

The iPhone 5 will arrive with a new version of Apple's operating system, iOS. It will be available for download to older phones on Sept. 19.

One feature missing from the new phone is a chip for near-field communications, or NFC. Other top-of-the-line phones are incorporating such chips, which let phones work as credit cards at some store payment terminals. They also enable phones to share data when "bumped" into each other.

Apple also announced a new iPod Touch model that brings over the changes applied to the iPhone 5, including the bigger screen and smaller connection port. For the first time, Apple's voice-controlled personal assistant software, Siri, will be available on the iPod.

Apple is also updating its iTunes software for the Mac and PC, with what is says is a "dramatically simpler and cleaner interface." It will be available as a free download in October.

Apple's main announcements were largely in line with investor expectations, and their response was tepid. Apple shares rose $5.13, or 0.8 percent, to $665.72 in afternoon trading.

The shares have been on a tear as expectations rose for the iPhone 5, rallying 16 percent since Apple's latest earnings report, in July.