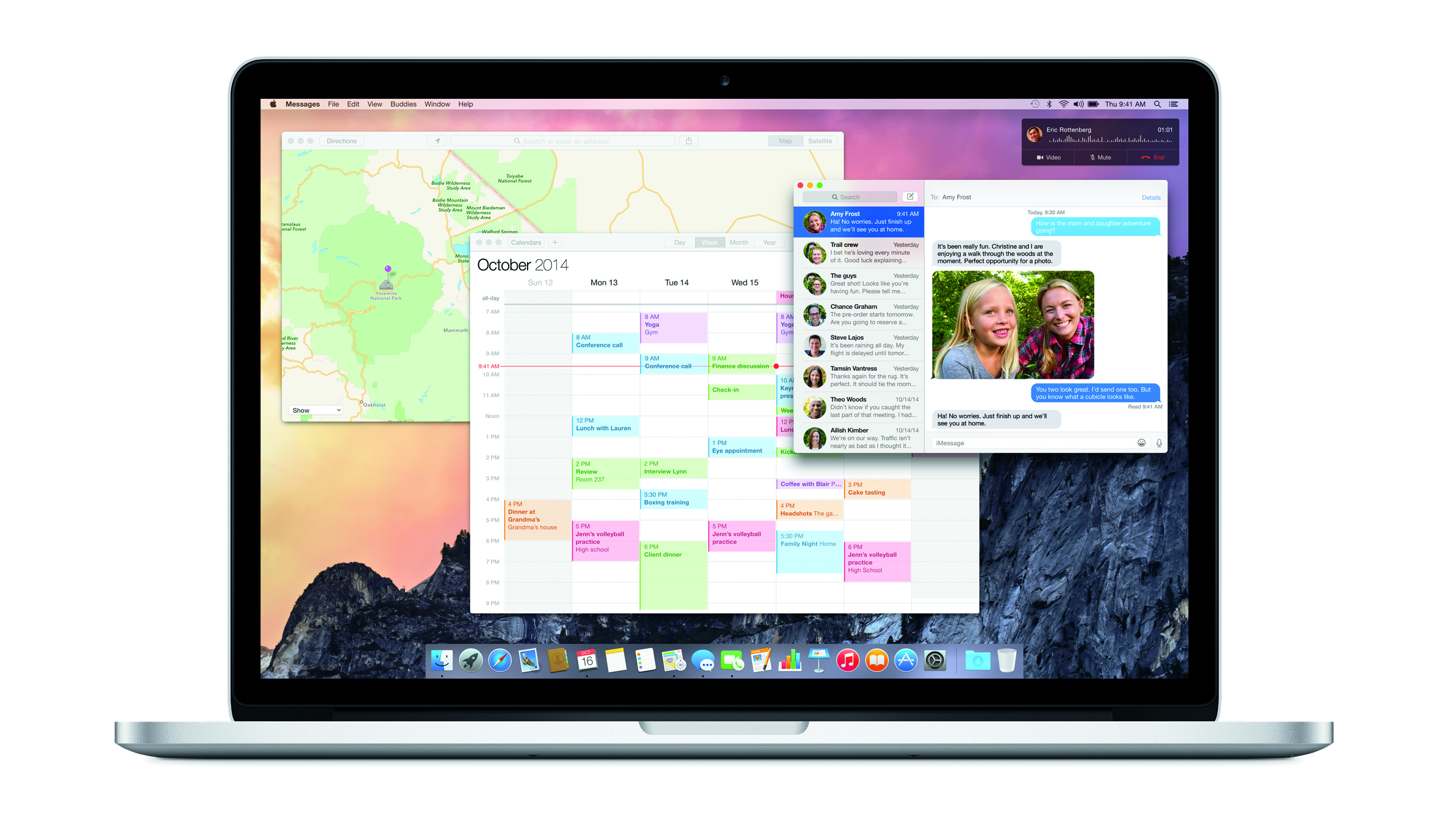 CUPERTINO, Calif. -- If you've upgraded your iPhone or iPad to iOS 8, the new software update for Mac computers will seem familiar.

Yosemite still has plenty of touches that make a Mac a Mac. But it continues a trend of breaking down barriers between the various devices as people depend more on smartphones and tablets for their everyday computing.

Here are some of the key updates and features of the new system.

Let's say you're writing a lengthy email on your iPad and would prefer the Mac's keyboard. You can just click an icon on the lower left corner of the Mac and continue there. What you've already started on the iPad automatically appears on the Mac, including the "Sent from my iPad" footer.

It works with several other apps, too. The Safari Web browser opens to the specific page being viewed on the other device. The Maps app launches to the location you were viewing. This feature came in handy as I was chatting with a friend through Messages and got tired of pecking on the iPhone's small keyboard.

You can also start tasks on a Mac and continue on an iPhone or iPad.

The seamless connections even extend to phone calls. As CNET explains, when a call comes in to your iPhone, you'll be able to see the caller ID and answer the call on your Mac as long as both devices are on the same Wi-Fi network.

Mac computers already come with a FaceTime app for videoconferencing, but that's limited to calling other FaceTime users. With Yosemite, you can make voice calls to anyone. Yosemite connects wirelessly to your iPhone to make and receive calls. The recipient sees Mac calls as coming from the iPhone's number.

You don't get video, and there's a slight lag with audio. In my tests, call quality was comparable to what you'd get over a speakerphone. It won't replicate a landline, but it's useful when your phone is charging in another room. The phone and the Mac must be on the same Wi-Fi network.

With the iOS 8.1 update coming soon, you'll be able to send regular texts from the Mac, too. Currently, you're limited to reaching other Apple users through iMessage chats.

The Mac's Spotlight feature already is good about finding various documents on your computer, no matter where you stored them. Yosemite goes further by pulling related items from the Web as well, similar to a feature Microsoft introduced last year with Windows 8.1.

A search for "Lady Gaga" got me not just an email receipt for an album I bought (I'm busted!), but also her Wikipedia entry, Twitter account and other albums I can buy on iTunes. A search for "Empire State Building" delivered news and map results. I can get directions with just one click.

In addition, when searching for a a local restaurant, for example, Spotlight will display a map, address and phone number, and you can use Yosemite's Handoff feature to call the number straight from your Mac.

Web browsers have gotten more powerful over the years, but added functionality also leads to complexity. The Safari browser that comes with Yosemite simplifies all that by consolidating many basic functions into a single box.

While most browsers now combine the box for Web addresses and search, Safari moves bookmarks and frequently visited sites there, too. A menu pops out when you click there, with choices that sync with those on your iPhone and other devices. And as you type in search terms, you also get Spotlight's Web suggestions.

On iOS devices, you can swipe down from the top to get nuggets to help you through the day - calendar appointments, weather conditions, stock quotes and more. Now, you can do that on the Mac as well by pulling out the Today panel from the right.

Preferences sync with your mobile devices, though content will vary. For instance, the iPhone gave the weather forecast for the current location, while Yosemite offered additional choices based on past settings. You can also add frequently-used tools such as a calculator to the Today panel, so you no longer have to go searching for it.

Apple's iCloud online storage service has been mostly useful for sharing and syncing music, photos and other documents among Apple apps on various Apple devices. With iCloud Drive, you can do that with non-Apple apps and Windows computers, too. Just move files to a special Mac folder for syncing. It's similar to what Dropbox and other storage services offer.

For iOS 8 mobile devices, though, developers need to tweak individual apps to take advantage of it. That's just starting to happen. Android devices aren't supported at all.

A related feature lets you send large attachments through the Mac's Mail app without clogging your recipient's inbox. Attachments get uploaded to iCloud, without counting against your storage quota. Your email then includes a link instead of the massive file. I was able to open a 27-second video clip of kangaroos on Windows, but not Android.

CNET notes that the new Photo app Apple announced at its Worldwide Developers Conference in June won't be available until 2015. It will allow users to edit and share photos across their Apple devices.

If you use a lot of obscure or specialty software, you might want to check first to make sure it's compatible with Yosemite. If you mostly use Apple software and services, you're not likely to encounter problems because Apple tested Yosemite with Apple users more extensively than before.

As the CNET review puts it, Mac OS X Yosemite "isn't going to completely change the way you use your computer, but the design refresh along with tons of refinements make it more than worth the time it takes to download. What you're getting with this upgrade are more efficient ways of doing things... while your desktop and mobile devices get more ways to work together."

Apple has posted instructions online for users who want to upgrade or get more information.