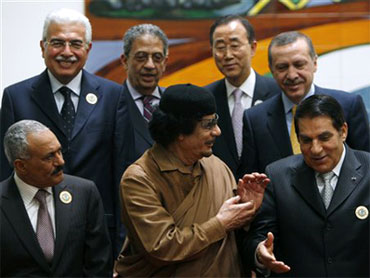 The head of the Arab League urged the 22-nation bloc on Saturday to engage Iran directly over concerns about its growing influence in the region and its disputed nuclear program.

Amr Moussa also warned in his opening statement at a two-day Arab League summit in Sirte, Libya, that Israeli construction on land claimed by Palestinians could scuttle the Mideast peace process for good.

Moussa outlined his plan for closer ties with Iran, saying it would involve a forum for regional cooperation and conflict resolution that would include Iran and Turkey - both non-Arab nations.

But the proposal could undermine U.S. and Israeli efforts to isolate Tehran amid concerns that its nuclear program aims to develop atomic weapons. It also comes as the U.S. and other Western powers push for a fresh round of sanctions over Iran's nuclear defiance. Tehran insists its program is for peaceful purposes.

"I realize that some are worried about Iran but that is precisely why we need the dialogue," Moussa said.

The push to engage Tehran seems to be at least partly fueled by Arab frustration over Washington's failure to get Israel to back down on plans for more Jewish settlements on land the Palestinians want for a future state.

It also suggests that Arab nations are increasingly less likely to align with the U.S. strategy on Iran if they feel they are getting nothing in return in Mideast peace efforts.

Arab countries have grown increasingly skeptical that President Obama will be able to forge a peace deal between Israel and the Palestinians to end a conflict that has fueled anti-American sentiment in the region.

Earlier this month, Arab nations opened the door for Palestinian President Mahmoud Abbas to enter four months of indirect, American-brokered peace talks with Israel. But they later threatened to withdraw support for the negotiations after Israel announced plans for new Jewish homes in east Jerusalem, the part of the city Palestinians claim as the capital of a future state.

Speaking at the summit Saturday, Palestinian leader Mahmoud Abbas also urged Mideast peace brokers to push Israel to stop settlement construction, and vowed that the Palestinians will not sign any peace deal with Israel without the Jewish state ending its "occupation" of east Jerusalem.

He accused Israeli Prime Minster Benjamin Netanyahu's government of trying to create a de facto situation in Jerusalem that would torpedo any future peace settlement.

The Palestinians are seeking strong Arab backing at the summit in the face of Israel's construction plans. They are also asking for millions of dollars in funding for Palestinians living in east Jerusalem.

The summit registered a higher than usual number of no-shows from Arab leaders. Eight heads of state stayed away, including Egyptian President Hosni Mubarak and King Abdullah of Saudi Arabia.

Recent Arab summits have been marred by disagreements among Arab leaders, divided between pro-Western rulers and more radical regimes. The divisions tend to water down joint Arab positions.

Also Saturday, one protester was killed at a rally in Yemen organized to coincide with the Arab summit when clashes erupted between police and protesters, a hospital official in Daleh said on condition of anonymity because he was not authorized to speak to the media. Thirty-four people were injured.

The protesters, who belong to Yemen's southern opposition parties, have become increasingly vocal about their demands for separation from Yemen's central government. They wanted the Arab summit to hear their complaints.

Southerners complain of neglect and discrimination by the north. The two halves of the country were separate nations until they united in 1990.