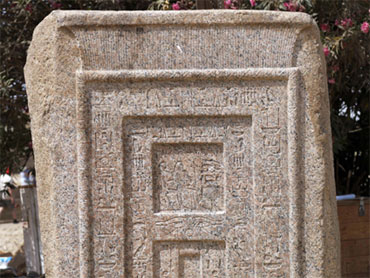 Archaeologists have unearthed a 3,500-year-old door to the afterlife from the tomb of a high-ranking Egyptian official near Karnak temple in Luxor, the Egyptian antiquities authority said Monday.

These recessed niches found in nearly all ancient Egyptian tombs were meant to take the spirits of the dead to and from the afterworld. The nearly six-foot-tall slab of pink granite was covered with religious texts.

The door came from the tomb of User, the chief minister of Queen Hatshepsut, a powerful, long ruling 15th century B.C. queen from the New Kingdom with a famous mortuary temple near Luxor in southern Egypt.

User held the position of vizier for 20 years, also acquiring the titles of prince and mayor of the city, according to the inscriptions. He may have inherited his position from his father.

Viziers in ancient Egypt were powerful officials tasked with the day-to-day running of the kingdom's complex bureaucracy.

As a testament to his importance, User had his own tomb on the west bank of the Nile in Luxor, where royal kings and queens were also buried. A chapel dedicated to him has also been discovered further south in the hills near Aswan.

The stone itself was long way from its tomb and had apparently been removed from the grave and then incorporated into the wall of a Roman-era building, more than a thousand years later.

False doors were placed in the west walls of tombs and faced offering tables where food and drink were left for the spirit of the deceased.