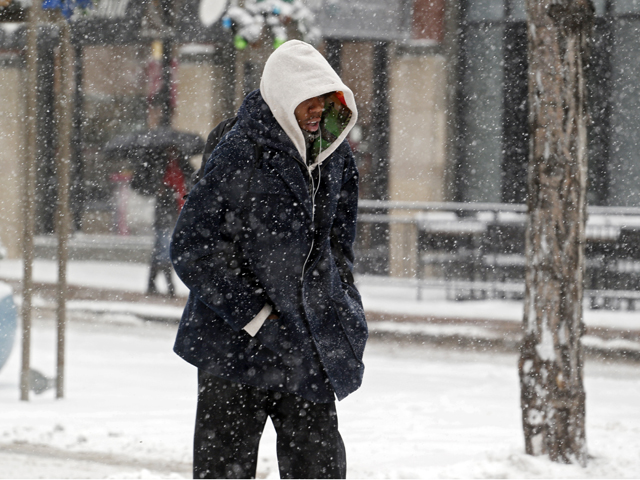 DENVER -- The jet stream hunkered to the south Wednesday, promising to bring nearly a week of temperatures that could dip to 20-below or worse in the northern midsection of the country, and forcing much of the rest of the nation to deal with unexpectedly cool temperatures.

In Minnesota, the cold has forced Salvation Army bell ringers inside and cancelled holiday parties, while dense, cold air sunk into Rocky Mountain valleys and kept some lower elevations below freezing in the West.

The dip in the jet stream is allowing Arctic air to plunge deeper into the United States. To add to the cold weather trouble, AccuWeather senior forecaster Paul Walker said a new storm will likely develop in New Mexico and west Texas on Thursday and head east, bringing ice and potentially power outages.

Extreme cold is nothing new in the Rockies, with temperatures regularly dropping each winter to minus 20 or minus 25 degrees annually. The difference this year is how long the cold snap is expected to last.

National Weather Service meteorologist Dave Bernhardt said the last extended cold period in Montana he could recall was in the winter of 1996.

Six inches of snow is forecast for Minneapolis, but as much as three feet has already fallen in northern Minnesota. Snow and ice has made travel treacherous. At least five people have died in weather related accidents in Minnesota since Monday. State police today responded to 200 crashes around Minneapolis and St Paul.

"People seem to be driving slowly respectfully, but you always see people driving too fast for conditions then there's an accident and it clogs everything up," said Erin Zellner in Minneapolis.

Two other fatal crashes in Montana and North Dakota were blamed on the weather.

Low temperatures in Denver are expected to drop just below zero through Friday but remain below 20 through the middle of next week. The storm dumped several inches of snow in Denver, and parts of Colorado's mountains could get up to 3 feet by the end of the day. Heavy overnight snow canceled a men's World Cup downhill training in Beaver Creek because the skiers need a clean, slick surface to practice on.

At the Denver Zoo, which was closed due to the weather, the polar bears were playing and lying in the snow and the Mongolian camels seemed friskier than normal, spokeswoman Tiffany Barnhart said. But many other animals remained in the indoor section of their quarters, close to their hay beds. Workers kept the lions occupied with toys and videos of African predators.

The risk of frostbite is high for people doing every day activities, like waiting for a bus, unless they're bundled up. Tyler Elick wore a hat and gloves as he played with his dog, Coconut, in a parking lot downtown.

"It's fun, but my cheeks are frozen, so I may be slurring my words," he said.

In a switch from the norm, lower elevation valleys could see lower temperatures than the mountains in the West.

Laramie, the home of the University of Wyoming, sits in a valley between two mountain ranges and could see temperatures dip to 29 below Wednesday night and early Thursday. The record low for Dec. 5 at Laramie is 33 below set in 1972.

In Montana, the cold spot will be the northern city of Havre, with low temperatures expected to dip as low as minus 30 between Thursday and Saturday. The city isn't expected to get warmer than minus 6 degrees during that period.

Ice and snow are expected in the East. It was 72 degrees in Dallas on Wednesday. By Thursday night it will be in the 20's.

The cold snap should last into next week, with some of the lowest temperatures for December in years.

In California, citrus farmers are doing everything they can to keep their crops from freezing.

In Central Valley, temperatures dropped into the upper 20s overnight into Wednesday, not enough to cause any damage to citrus crops. Citrus farmers, however, are anticipating colder temperatures overnight and Thursday and are continuing to take precautions, said Bob Blakely, of California Citrus Mutual.