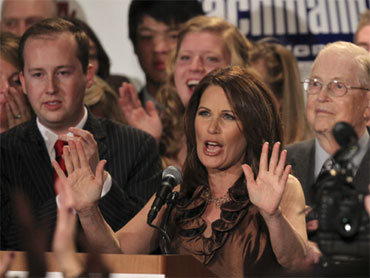 Many Republicans who swept rural Democrats from office are now confronting the reality of a promise to reduce spending: Should it cover the farm subsidies that have brought money and jobs to their districts and directly benefited some GOP lawmakers or their families?

At least 13 Democrats on the House Agriculture Committee lost on Nov. 2, and most of then helped steer generous farm support back home. Many of their replacements avoided the issue of farm payments during the campaign as they focused on broader themes of lowering federal spending and changing Washington.

They'll have to face it soon enough. Congress is expected to begin work on the next five-year farm bill before the 2012 election.

"They are here to represent their districts, and if their district is clearly a strong agricultural district that uses the programs in the farm bill, it may be something where they have to break with what they campaigned on," says Chandler Goule, a lobbyist for the National Farmers Union.

For some deficit-cutting Republicans, it's a question that's close to home.

Hartzler and her husband own a farm equipment business and a farm where they grow corn and soybeans. She received more than $770,000 in farm subsidies over the past 15 years, according to the Environmental Working Group, a Washington advocacy group that collects and analyzes farm subsidy data.

While promising to cut what she called wasteful spending, Hartzler says protecting farmers is a national security issue because the decline of farms could mean more imported food.

"There are fewer and fewer farmers today so it makes them more of an easy target than others," she says. "American consumers have a vested interest in making sure we have a safe and reliable food supply that is home grown."

Still, she believes some programs may need to be cut.

"There's a benefit to keeping that food safety net there, but we need to look at all discretionary spending and ask the hard questions," she says.

Crop insurance it costs taxpayers billions of dollars a year is an effective way to give farmers the security they need when weather ruins a harvest, Hartzler said. She suggests the Conservation Reserve Program, which pays farmers to idle environmentally sensitive land, may have to go.

GOP Rep. Michele Bachmann of Minnesota, an outspoken critic of farm payments, listed between $15,000 and $50,000 in farm income as one source of revenue on her personal financial disclosure statement last year, citing a Bachmann family farm in Independence, Wis., as an asset.

That farm, which was owned by her father-in-law, received more than $250,000 in subsidies over the past 15 years, according to the Environmental Working Group. A Bachmann spokesman said she is not involved in any operational decisions.

South Dakota Republican Kristi Noem, who ousted Democratic Rep. Stephanie Herseth Sandlin, had partial ownership in a ranch that received more than $3 million in subsidies over 15 years, though her family bought her out last year.

Farmer and gospel singer Stephen Fincher won an open seat House race in Tennessee this year while both railing against federal spending and deflecting criticism that his family had received $3.2 million in federal farm subsidies in the past 10 years.

Whether those members defend farm spending or not, the agriculture sector may be in for cuts when Congress looks at writing the next five-year farm bill, expected by 2012. There probably will be much less money to go around, and Republican Rep. John Boehner of Ohio, in line to be speaker, voted against the last farm bill, saying it was too costly.

Bob Stallman, president of the American Farm Bureau, says he thinks Boehner will listen to members of his party who support farm subsidies and programs. Still, he says, "there is more pressure this time around than there ever has been" to cut costs.

One target may be direct payments. These are distributed to some farmers no matter how much they grow. While Southern farmers who grow more expensive crops such as cotton and rice say they depend on them, many criticize those dollars because they are not directly tied to prices or production.

Farm supporters warn that Congress should learn lessons from past mistakes, however. The 1994 Republican congressional sweep led to the 1996 farm bill, known as the Freedom to Farm Act, which sought to return the farm sector to the free market. Commodity prices fell, and Congress was forced to later approve billions of dollars in emergency spending for farmers.

Since then, a powerful farm coalition in both the House and the Senate has led to passage of two robust farm bills. David DeGennaro, a legislative and policy analyst at the Environmental Working Group, says he expects to see much of the same this time around, no matter which party is in control.

"There will be lots of calls and pressure to cut costs, but I don't think we're looking at a draconian cut across the board," he said.