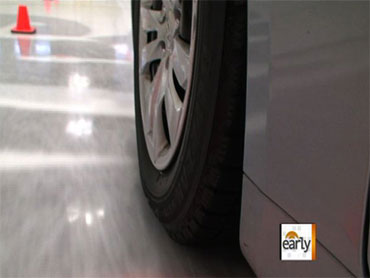 With nearly 40 million travelers expected to hit the road for the Thanksgiving holiday, now is a good time to think about the tires on your car. Those four rings of rubber can make all the difference when it comes to avoiding an accident.

On "The Early Show," Consumer Correspondent Susan Koeppen reported most Americans use all-season tires. But experts say snow tires are a good investment during the winter season.

But are they really worth the money? Koeppen wanted to find out, so she got behind the wheel and headed into an icy situation -- much like the conditions many Americans have already experienced on the roads, from the Midwest down to the Texas Panhandle.

As temperatures drop, driving conditions get dangerous. Koeppen noted traditionally, December, January and February are the worst months for driving, with nearly one and a half million crashes last year alone, according to the National Highway Traffic Safety Administration.

So how do you keep yourself safe?

Matt Edmonds, vice president of TireRack.com, says it all starts with your tires.

He told Koeppen, "The easiest way to think about it is the tires are the shoes on your car. Having the right shoes on your car for the weather conditions are just as important as your personal shoes."

So Koeppen put some tires to the test on a skating rink in Stamford, Conn.

She tried out three identical cars -- one with summer tires, one with all-season tires, and one with winter tires.

Koeppen said at just 10 miles per hour the tires reacted to braking differently.

But with the winter tires, Koeppen stopped after almost 18 feet.

Koeppen also tried turning, again at just 10 miles per hour. The winter tires went around the corner without any problems. The all-season tires offered a bit less control. And Koeppen said, the summer tires offered no control at all.

Edmonds said, "Our vehicles these days have so many technologies to help give us control and safety, but they're only as good as the traction they can control. And the only things that give us traction are those four tires.

Koeppen reminded viewers that if you're going to put winter tires on your car, you should put them on from Thanksgiving to Tax Day. She added you'll need all four tires to be winter tires -- not just the front or the back -- because that can actually be a hazard.

If you live in an area that doesn't experience winter conditions, Koeppen said you'll be fine with all-season tires. However, if you live in a place that gets ice or snow, she said winter tires can make a big difference.

Koeppen said a set of winter tires will cost about $400 to $500 -- about the price of the deductible on your car insurance.

She said, "Would you rather have tires or a crash?"