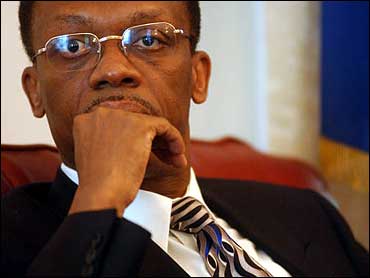 A weeping former Haitian President Jean-Bertrand Aristide, living in exile in Africa since he was ousted in a rebellion five years ago, said Friday he wants to return to his quake-devastated country and is prepared to leave immediately, but did not indicate any concrete plans to do so.

In a rare public appearance, Aristide told reporters at a hotel next to Johannesburg's airport that he and his family are ready to return to Haiti to help with the catastrophe. He said friends, whom he did not name, are willing to provide a plane to fly him to Haiti with medical supplies and other emergency equipment.

"As far as we are concerned, we are ready to leave today, tomorrow, at any time to join the people of Haiti, share in their suffering, help rebuild the country, moving from misery to poverty with dignity," said Aristide, his wife Mildred next to him, eyes downcast, twisting a handkerchief.

Aristide spoke in a hotel meeting room reserved by the South African foreign affairs ministry. A ministry official told reporters Aristide would make the statement and not answer questions, and the former president didn't. He wiped his tears with a white handkerchief as he left the hotel.

Aristide, a former slum preacher, was beloved by many of Haiti's majority poor but opposition to his rule grew during his second presidential term after he was accused of masterminding assaults on opponents, allowing drug-fueled corruption and breaking promises to help the poor. Still, during riots in Haiti in 2008 over soaring food prices there was a deafening clamor for Aristide's return, showing that he remains hugely popular.

If Aristide does return, political instability in an impoverished nation struggling to dig itself out from the massive 7.0-magnitude earthquake could result. Aristide has previously hinted at returning, saying he merely wants to be a teacher. But his enduring popularity and ability to galvanize Haitians would likely propel him into the political spotlight.

"We feel deeply and profoundly that we should be there, in Haiti, with them, trying our best to prevent death," Aristide told reporters.

He wiped away tears that rolled from underneath his glasses as he spoke of Haitians' indomitable spirit.

Saul Kgomotso Molobi, a South African foreign affairs ministry official who accompanied Aristide to the briefing, said South Africa knows of no plans for Aristide to return to Haiti. Molobi said he could not answer questions about what arrangement would have to be made.

Aristide became popular in his homeland as a priest in the Haitian slum of La Saline. He was first elected president in 1990 but was ousted in a military coup the following year. U.S. troops sent by then President Bill Clinton, currently a United Nations special envoy to Haiti, restored Aristide to power in 1994. After stepping down, Aristide was re-elected in 2000 but was ousted again in the bloody 2004 rebellion.

Aristide and his wife live with their two daughters in a government villa in Pretoria, South Africa's capital, just north of Johannesburg. The couple has embraced an academic life, with Aristide writing on the linguistics of Zulu and Haitian Creole, as well as on the theology of love.