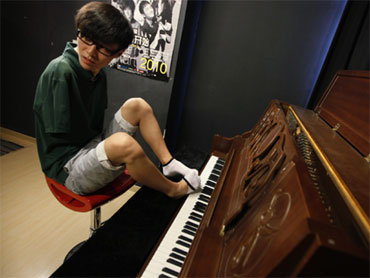 Pianist Liu Wei sits quietly to compose himself before plunging into the music. Then he takes off a sock.

The 23-year-old, whose arms were amputated after a childhood accident, plays the piano with his toes.

Liu was thrust into the limelight earlier this month when he performed on "China's Got Talent," the Chinese version of the TV show that helped make Britain's Susan Boyle a singing star.

"Whatever other people do with their hands, I do with my feet. It's just that," says Liu, a tall, slender man who peers shyly from behind dark-rimmed glasses.

"China's Got Talent," which has also featured disabled modern dancers and break-dancing migrant workers, has been a hit since its launch in July, despite skepticism among some viewers about whether all the participants' stories are genuine. The Dragon TV program is drawing attention to the hopes and challenges of the disabled and otherwise disadvantaged in China.

In his first appearance, Liu received a standing ovation from the audience, many of whom were moved to tears, for a performance of "Mariage D'amour" by Richard Clayderman.

During an interview with The Associated Press in Shanghai, where the show is filmed, he played a still unnamed, poignant piece he composed himself.

Sitting on a tallish red stool, he removed his shoes and right sock, carefully using his toes to place the sock in his right shoe. (He plays with his left sock on.) He wiped some of the keys with a tissue, and then rested his heels on a velvet-covered, narrow platform before the piano.

Time after time, he played the piece gently and flawlessly.

Liu, who was 10 when he lost his arms from an electrical shock while playing hide-and-seek, uses his feet to navigate online, eat, dress and brush his teeth.

"I wish I could go out driving to have fun. Apart from that, there is really nothing more I want to do," said Liu, who lives in Beijing. "Music has become a habit for me. It is just like breathing air."

He only began playing the piano in his late teens.

"Nobody ever decreed that to play the piano you must use your hands," he said.

Prosthetic limbs don't interest Liu. He has no need for special support, he said, though he conceded he has often met with discrimination. Disabled people in China, despite efforts to improve conditions, are often forced to beg on the sidewalks. Liu is able to support himself, though he wouldn't say how.

"I have food to eat and clothes to wear and many people caring about me. What is there to be dissatisfied about?" he said. "There are many people without enough to eat. I'm much more fortunate than they are."

Sun Ganlu, a writer and arts critic in Shanghai, said that, whatever the commercial motives behind "China's Got Talent," the show is raising awareness in a positive way.

"The fact is that people are touched by these great performers, regardless of whether they are disabled or poor," he said. "They are struggling in life compared with others, but they also have hobbies and talents to get them through their tough lives."

"It helps people be more aware of whether we are doing too little to help these people," he added.

Liu's biggest beef is with people who insist on helping him without asking first.

"Here, if someone thinks you need help they will just do it. They assume you must want help," he said. "Foreigners will ask first if you want any help. They will first respect your wishes. In that way, China could make an improvement."

Liu would like to be seen just as a pianist.

"Right now, everyone looks at me and says, 'Oh, Liu Wei has no arms and it's very difficult for him to play the piano,"' he said. "In the future, I want them to say, 'Oh he's good.' To first notice the work is great, and then say, 'Liu Wei did it.' ... What I demand is that my work be so good people won't notice that my arms are missing."