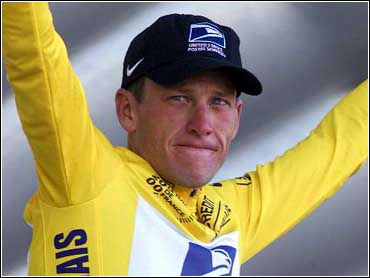 Lance Armstrong expects to be riding again soon after being hit by a car earlier this week in southern France.

"Nothing broken or serious but very 'banged up,'" Armstrong, 28, said on his Web site, www.lancearmstrong.com. "I had a helmet on, so we're safe there, but I'm off the bike for two days or so."

Armstrong's bicycle was destroyed and his helmet was smashed into pieces Tuesday after he and U.S. Postal Service teammate Tyler Hamilton were hit by a car.

The reigning two-time Tour de France champion took the brunt of the impact with the car, but X-rays proved negative, according to U.S. Postal Service team sports director Johan Bruyneel.

"He's resting in Nice at home," Bruyneel said in a telephone interview. "It's just bruises, but he's not able to make any efforts for the moment."

Armstrong, Hamilton and another teammate, Frankie Andreu, were training on a country road outside Nice when a car coming in the opposite direction missed a turn and ran straight into them.

"The car drove straight into Lance, but luckily his bike took most of the impact," Hamilton said on his Web site, www.tylerhamilton.com. "Lance went flying off his bike and tumbled down the road.

"I swerved to avoid the car and a somersaulting Lance and went crashing straight off the road," Hamilton said. "Aside from reopening a few wounds from a crash at the Tour of Burgos, I made it through relatively unscathed."

Andreu was able to avoid the car and did not crash.

Armstrong and Hamilton will compete in both the road race and the time trial at the Sydney Olympics. Armstrong will leave for Australia in mid-September.