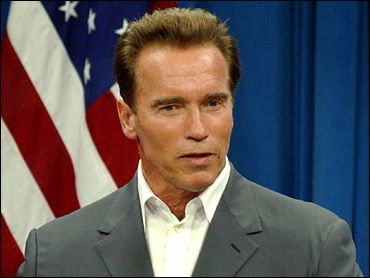 Blaming his faulty English, Gov. Arnold Schwarzenegger on Wednesday said he misspoke when he suggested that California's border with Mexico should be closed to help solve the nation's illegal immigration problem.

Schwarzenegger made the remark while speaking to newspaper editors and publishers Tuesday. He said he intended to say the border should be secured.

"Yesterday was a total screw-up in the words I used," the Republican said at a news conference. "Because instead of closing, I meant securing. I think maybe my English, I need to go back to school and study a little bit."

In a speech at the annual meeting of the Newspaper Association of America, Schwarzenegger said, "Close the borders in California and all across Mexico and in the United States. Because I think it is just unfair to have all those people coming across, have the borders open the way it is, and have this kind of lax situation."

Schwarzenegger's contrition seemed to quell the issue at the Capitol. Hispanic lawmakers — many of whom are also rival Democrats — said they accepted his apology.

"I don't think the governor identifies himself with that kind of rhetoric," said Assembly Speaker Fabian Nunez, a Democrat. "I don't know why he said it, but I'm very pleased he has totally removed himself from those folks who espouse that kind of hatred."

Nunez's office, however, pointed out that Schwarzenegger said something very similar in a 2003 interview with Fox TV host Bill O'Reilly.

Meanwhile, a California Assembly committee is trying to snuff out Schwarzenegger's habit of lighting up cigars in the Capitol courtyard.

The panel approved a measure to ban smoking in enclosed courtyards of state buildings, including the one where Schwarzenegger put up a "smoking tent."

Democratic Assemblyman Juan Vargas said the bill isn't aimed at the Republican governor although it would cover him. He said smoke can get trapped in courtyards, posing health risks for nonsmokers.

But Assemblyman George Plescia, a Republican, said nonsmokers aren't forced to go to courtyards where people may be smoking. "It's just as easy to walk to the other side of the building," he said.

Schwarzenegger's office said he hasn't taken a position on the bill.

California already bans smoking inside public buildings and within 20 feet of an entrance to those facilities.