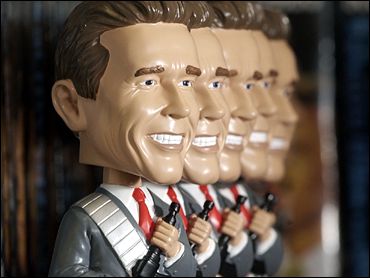 Gov. Arnold Schwarzenegger is suing a company that he alleges unlawfully used his image for a toy plastic "bobblehead" doll.

The lawsuit was filed Friday but served on the doll's makers Tuesday. The doll has a large head on a spring that bobbles when it is bumped.

The makers of the bobbleheads contend the governor is a public political figure and can no longer control his image.

"He's no different than any other politician," said Todd Bosley, an owner of Ohio Discount Merchandise Inc. in Canton, Ohio. The company has produced a variety of bobbleheads of public officials. "We didn't reference him in any way, shape or form to his past movies or anything like that."

That could be open for debate. The doll features Schwarzenegger in a gray suit, white shirt and red tie — but carrying a gun with a belt of bullet clips strapped over his shoulder. That's not his normal attire as governor. Weapons do feature strongly in several of his movies.

"Arnold is an aggressive governor, so we put him with a gun," said Toby Bosley, Todd's brother and partner.

Martin Singer, a lawyer for Schwarzenegger, gave the company 48 hours Thursday to stop selling the doll, turn over all remaining dolls and make a financial payment "as compensation for the damages you have caused," reported the San Francisco Chronicle.

Schwarzenegger aggressively protects his public image, and has filed many such demands and lawsuits against companies that appropriate it, the Chronicle reported.

"The market value of Mr. Schwarzenegger's name, photograph and likeness for commercial purposes is worth millions of dollars," Singer's letter said.

Legal experts said it could be a close call whether the Bosleys were stealing Schwarzenegger's right of publicity.

"This will depend on what it is people are buying: a bobblehead of Schwarzenegger like they would buy one of Britney Spears, or is the bobblehead making a political statement, which would be protected by the First Amendment," which covers free speech, said Los Angeles attorney Robert N. Benjamin.

"Hillary Clinton signed hers and sent it back," Toby Bosley said. "Jimmy Carter loved his and sent us a signed book back for doing it for him. Giuliani took his around. Everybody we've done politically has been very happy with them. Arnold is really the first person we've had a problem with."