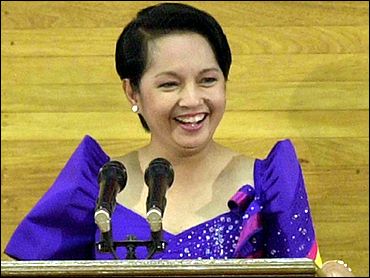 A day after facing down a military mutiny, President Gloria Macapagal Arroyo on Monday vowed to punish the plotters and ordered an investigation into the causes of the uprising that shook her presidency.

In a state of the nation address, Arroyo assured the country that she remains in control and promised to get to the root of the conspiracy in which 296 soldiers and officers seized a shopping complex for 19 hours before giving up without a short fired.

"I am constituting an independent commission to investigate the roots of the mutiny and the provocation that inspired it," she told the Congress. "Such actions are deplorable and will be met with the full force of law."

Hours before, police arrested a key supporter of Joseph Estrada, the disgraced ex-president Arroyo replaced after his ouster by popular protest in 2001.

Police said Ramon Cardenas, a member of Estrada's Cabinet, owns a house near Manila where officers found assault rifles, ammunition and red arm bands similar to those used by the mutinous soldiers in taking over complex in downtown Manila.

They described his residence as a "staging area or safe house" for the mutineers. Cardenas was Estrada's deputy executive secretary during his presidency.

Police alleged that several Estrada cronies aided and fomented Sunday's rebellion. Estrada has been in custody for more than two years as he stands trial for corruption. Lawyers for the ex-leader insisted he had nothing to do with Sunday's action.

Arroyo did not mention her political plans, but pledged to solve critical problems including terrorism, drugs, corruption, separatism and the struggling economy. Her words fueled speculation that she might reverse an earlier pledge not to stand in next year's presidential election.

She promised to reform the police force, branded as corrupt and inept following the July 14 escape of three terror suspects thought to have bribed their way out of its main Manila headquarters.

Arroyo, however, failed to outline a widely expected change of senior police commanders — something that had been included in a draft of her speech supplied to reporters. There was no explanation about the omission.

Financial markets plunged Monday in response to a failed mutiny, but blue chip shares bottomed out early and contained their losses at 2.1 percent as traders focused on the quick, peaceful resolution to the crisis.

Earlier on Monday, police announced they were using emergency powers granted by Arroyo to quell the mutiny to detain some of Estrada's associates. Cardenas was the first to be picked up. The powers allow arrests without warrants.

Five junior officers, who organized the uprising, were being questioned under guard, said army spokesman Lt. Col. Joselito Kakilala. The other mutinous troops were confined to their barracks.

The mutineers demanded the resignation of Arroyo, but backed down during talks with government negotiators and after Arroyo threatened to crush the rebellion with tanks and sharpshooters.

About 3,000 police officers and sharpshooters deployed outside the Congress building for Arroyo's speech. Arroyo traveled to Congress aboard a helicopter.

Outside, thousands of protesters called for her resignation, saying Arroyo had failed to give land to poor farmers, control graft and ease poverty.

"The people's call for Arroyo's resignation will continue to escalate, especially after the mutiny by young officers and soldiers," labor leader Elmer Labog said.

Protesters burned a 12-foot effigy of Arroyo with moving legs, symbolizing the president on the run.

The mutineers demanded the resignation of Arroyo, but backed down during talks with government negotiators and after Arroyo threatened to crush the rebellion with tanks and sharpshooters.

The Philippines has had about eight military uprisings and coup attempts since the "people power" ouster of dictator Ferdinand Marcos in 1986.

The renegades wired the apartment and shopping complex — home to some of the city's richest citizens, foreign businesspeople and diplomats — with explosives and booby traps.

The renegades complained of corruption and misconduct in the upper ranks of the military and government and complained that Muslim and communist rebels were buying weapons and ammunition from the military.