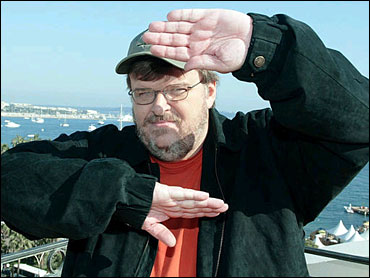 "Fahrenheit 9/11" put Michael Moore's politics at center stage at the Cannes Film Festival. And there they stayed, right up to the closing act, when he accepted the top prize.

The message of Moore's film - that White House foreign policy since the Sept. 11 attacks has been disastrous - generated so much sympathy here that jury president Quentin Tarantino worried Moore might misinterpret the jury's intentions.

"When I was on stage with Michael Moore, I knew all this politics crap would be brought up," the "Kill Bill" director said Sunday, a day after awarding Moore the Palme d'Or, the festival's highest honor.

So "I just whispered in his ear and said, 'I just want you to know it was not because of the politics that you won this award,"' Tarantino said. " 'You won it because we thought it was the best film that we saw.' "

The whispered exchange between the two Academy Award winners underlined how much effect Moore's politics had on this festival.

The awards ceremony started out with a political statement inspired by Moore. Belgian director Jonas Geirnaert, a winner for his short film, used his first big break as a filmmaker to talk about Moore's movie and urge Americans not to vote for President Bush.

Moore's Cannes appearances have given him a much wider following internationally, including in Europe, where people love his anti-Bush message and are charmed by his folksy all-American image. His documentary about gun culture in America, "Bowling for Columbine," won a special prize here two years ago.

The new movie had one of the longest standing ovations in recent memory - which may have had something to do with his politics as well as his filmmaking. But Moore says he wants to be judged on his skills as a director.

"Fahrenheit 9/11" accuses the Bush camp of stealing the 2000 election, overlooking terrorism warnings before Sept. 11 and fanning fears of more attacks to secure Americans' support for the Iraq war.

Moore's assault on U.S. policy got him into trouble with Disney, which refused to let subsidiary Miramax release "Fahrenheit 9/11."

He is still trying to work out a deal for U.S. distribution but thinks the win at Cannes will guarantee him an American audience. He also cites the makeup of the nine-member jury - four out of nine are Americans - as proof of the strong reaction the film could have in the United States.

"I would be surprised within the next 24 hours if we don't have somebody," Moore said. "Miramax has been fielding calls all day."

He hopes to have the film in U.S. theaters by July. But he is cynical about how much impact it could have on the U.S. presidential election in November.

"If some of those (viewers) end up going and deciding to become good citizens by exercising the right to vote, great," he said. "But let's be honest... You have to start with pretty low expectations in terms of the political end of this when you live in a country where half the people don't vote."

The new movie is darker in tone than "Bowling for Columbine," and includes grisly war footage. But the filmmaker also mixed in humor to get his point across - a technique the jury singled out in explaining what made Moore special.

Moore's sense of humor came out on awards night, too, when he couldn't resist thanking his "cast" - the U.S. Cabinet, and particularly President Bush, whose speaking blunders turn up in the movie.

"He's got the funniest lines in the film," Moore joked. "I'll be eternally grateful to him."