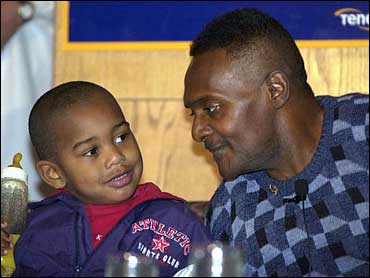 The world's fifth recipient of a self-contained artificial heart has died, three days after suffering a stroke.

James Quinn, 52, died Monday at Hahnemann University Hospital after surviving almost 10 months with the AbioCor heart. Of the seven people implanted with the device beginning more than a year ago, only one is still alive.

The retired baker and Vietnam War veteran received the heart Nov. 5. One month later, he walked without assistance into a news conference; a small battery pack on a belt was the only evidence of the transplant.

All of the AbioCor patients were dying of heart failure and were too sick to qualify for human heart transplants.

Tom Christerson, 71, is the longest living recipient of the device. Christerson, of Central City, Kentucky, had it implanted on Sept. 13 and since then has improved enough to be allowed to be released from the hospital.

The plastic-and-titanium device has an internal battery and controller that are implanted with the heart and an external battery that passes electricity through the skin.

Quinn suffered a stroke on Friday. Doctors said efforts to improve his condition were unsuccessful and he became unresponsive that evening. He was withdrawn from life support Monday.

"In every aspect, James Quinn was a hero," said Dr. Louis Samuels, director of the surgical team that installed the heart. "He fulfilled his wish to be a pioneer, to live a little longer to see his grandchildren, and to contribute something to mankind."

At the time that he received the artificial heart, doctors estimated that he had as little as a week to live.

Quinn made good on his plan to make the most of the added time on earth that he got as a result of the surgery.

In the months before he died, Quinn was able to take several excursions from the hospital to attend church, go home for his wedding anniversary, and visit family and friends. He even found time to go to a comedy club.