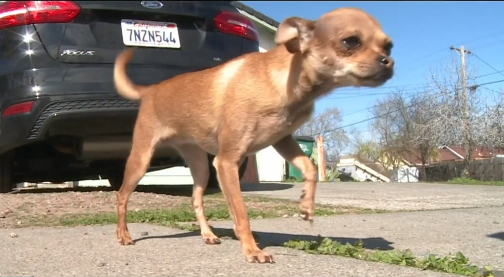 STOCKTON, Calif. -- The search was continuing late Wednesday for a mother of three who went missing in east Stockton, California, after taking her beloved dog out for a walk. The dog came back, but the woman didn't, CBS Sacramento reports.

Family members said they haven't seen Ashley Holloway, 30, since she left her home. They have been canvassing several neighborhoods talking to people in the hopes of finding any clues on her whereabouts.

Lyda Padilla said she's been praying every night for her friend who mysteriously disappeared almost a week ago.

"I've known Ashley since she was a baby so -- and this ain't like her to be missing like this. She's a good mom; I don't know why she disappeared. All I know is that hopefully she'll come home," said Padilla.

Holloway has three children, all under the age of 16. She also has a dog, Tinkerbell -- a small Chihuahua that friends say never left her side.

"She was walking the dog, and I guess the dog came back and she disappeared," Padilla said.

Holloway's long-time boyfriend, Albert Garcia, said they have been together for 13 years. Garcia said the couple had plans to hang out after the Super Bowl.

"She said a couple of words to my son here, and she walks off, and he was actually the last one to see her," said Garcia.

A spokesperson for the Stockton Police Department said detectives are looking into Holloway's disappearance. In the meantime, loved ones said they are not giving up hope.

"I've been worried since she's been gone. I don't know what to think, what to do; we put up the flyers everywhere. We asked all the neighborhood, every friend and person that knows her from the taco truck to the liquor store -- everyone we can think of," said Garcia.

According to a flyer family members have been passing out, Holloway was wearing a black hoodie sweatshirt and blue jeans when she disappeared. Anyone with information in the disappearance of Holloway was being asked to contact crime stoppers.