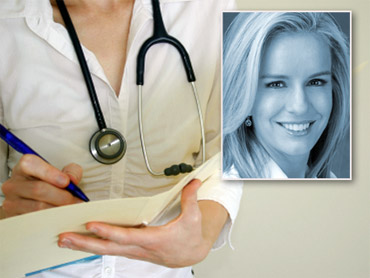 Kidney stones are a painful ailment that affects more than a million Americans every year.

Over the weekend, CBS News Medical Correspondent Dr. Jennifer Ashton was one of them.

On "The Early Show" Monday, Ashton said she was "almost back to normal."

A kidney stone, Ashton explained, is a solid deposit that comes from the minerals that are in the blood and get filtered into one's urine and wind up in the kidneys.

"They can sit there without any symptoms at all until they get dislodged and start to move down the very tiny tube called the ureter that connects the kidney to the bladder, and that's when the pain starts."

"Early Show" co-anchor Maggie Rodriguez added the pain is from a potentially big stone going through a small space.

Ashton said the pain of kidney stones is worse than childbirth.

"I've had two children and three kidney stones and the kidney stones dwarfed the pain of labor and delivery. This is excruciatingly painful," she said. "You feel like the pain is going to kill you or you want to die from the pain. It's horrible."

But how do you know if your pain is a kidney stone?

"It typically starts in the side or the flank, one side or the other, because this is where the kidneys are high up. And typically the pain can radiate or travel into the groin. And it can be constant, it's very sharp, very severe, and it can go and go. It's actually called renal colic."

For people who are suffering from kidney stones, you can either pass them or get surgery. Ashton said she was heavily medicated with morphine, given an IV, and eventually passed hers. Stents, like those used in heart surgery, are also available to open up the ureter. Laser shockwaves, Ashton explained, can also bust the stone up into little pieces. In severe cases, lasers or surgery are also used to extract stones.

Though sometimes medication is needed, Ashton said drinking a lot of water is the most important thing to remember for kidney stones.

"Doctors can be the worst patients," she said. "Hydration is key."