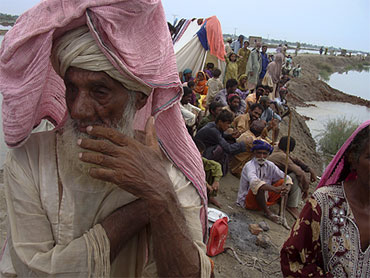 Rescuers lifted muddy bodies into trucks in the remote Chinese town where hundreds died and more than 1,100 were missing from landslides caused by heavy rain that has flooded swaths of Asia and spread misery to millions.

In Pakistan, the United Nations said the government's estimate of 13.8 million people affected by the country's worst-ever floods exceeded the combined total of three recent megadisasters - the 2004 Indian Ocean tsunami, the 2005 Kashmir earthquake and the 2010 Haiti earthquake.

Rescuers in mountainous Indian-controlled Kashmir raced to save dozens of stranded foreign trekkers and find 500 people still missing in flash floods that have killed 140.

In China, the death toll jumped to 337 late Monday after Sunday's landslides in the northwestern province of Gansu - the deadliest incident so far in the country's worst flooding in a decade. A debris-blocked swollen river burst, swamping entire mountain villages in the county seat of Zhouqu and ripping homes from their foundations.

"There were some, but very few, survivors. Most of them are dead, crushed into the earth," said survivor Guo Wentao. Associated Press Television News showed the bodies of his younger brother and sister, wrapped in quilts, being carried away on a stretcher as crying relatives followed.

The government said 1,148 were missing Monday night. About 45,000 were evacuated. It was not known how many of the missing were in danger or simply out of contact as workers rushed to restore communications in the area, where one-third of residents are ethnic Tibetan.

More rain is expected in the region over the next three days, the China Meteorological Administration said. On Monday evening, clouds were building ominously over the mountains where the mud started flowing.

"We were dumbfounded by the enormity of the flood situation when we got to the scene," said Chen Junfeng, a disinfection specialist whose army battalion was the first on the scene Sunday.

Photos showed wrapped bodies tied to sticks or placed on planks and left on the shattered streets for pickup.

has killed more than 1,100 people this year and caused tens of billions of dollars in damage across 28 provinces and regions.

In Pakistan, two weeks of flooding have killed 1,500.

"It looks like the number of people affected in this crisis is higher than the Haiti earthquake, the tsunami or the Pakistan earthquake, and if the toll is as high as the one given by the government, it's higher than the three of them combined," Maurizio Giuliano, spokesman for the U.N. Office for the Coordination of Humanitarian Affairs, told The Associated Press.

The U.N. estimates that 13.8 million people have been affected by the Pakistan flooding - 2 million more than the other disasters combined. The figures include people who need short-term or long-term aid.

Rescue workers have been unable to reach up to 600,000 people marooned in the northwestern Swat Valley, where many residents were still trying to recover from an intense battle between the army and the Taliban last spring, Giuliano said.

"The magnitude of the tragedy is so immense that it is hard to assess," said Pakistani Prime Minister Yousuf Raza Gilani during a visit to the central Pakistani city of Multan.

Heavy rains continued. Rising national anger has been directed at an already unpopular government that has deployed thousands of soldiers for aid but has been overwhelmed itself.

Manzoor Ahmed, 25, was one of thousands of people who fled their homes in Sindh province in the south.

"It would have been better if we had died in the floods as our current miserable life is much more painful," said Ahmed, who spent the night shivering in the rain.

Thousands of Pakistanis in the neighboring districts of Shikarpur and Sukkur camped out on roads, bridges and railway tracks - any dry ground they could find.

"I have no utensils. I have no food for my children. I have no money," said Hora Mai, 40, sitting on a rain-soaked road in Sukkur along with hundreds of other people. "We were able to escape the floodwaters, but hunger may kill us."

Meanwhile, the death toll from flash floods in the remote desert mountainsides in Indian-controlled Kashmir rose to 140 with the recovery of eight more bodies overnight, police said Monday. The dead included five foreigners, but their nationalities were not immediately known. An estimated 500 more people were missing.

In North Korea, some 10,000 people sheltered in public buildings in the border city of Sinuiju near China because of flooding, the Red Cross said Monday. Flash floods destroyed thousands of homes across the impoverished country, and the Amnok River recorded its highest water level in 15 years, Red Cross said.