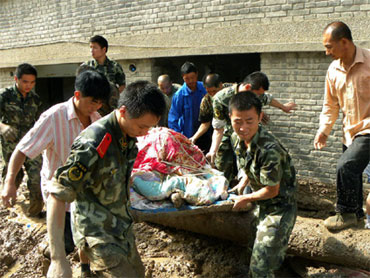 Floods and landslides across Asia plunged millions into misery Sunday as rubble-strewn waters killed at least 127 in northwestern China and 4 million Pakistanis faced food shortages amid their country's worst-ever flooding.

Terrified residents fled to high ground or upper stories of apartment buildings in China's Gansu province after a debris-blocked river overflowed during the night, smashing buildings and overturning cars.

Photos: Floods and Landslides in China

The official Xinhua News Agency said Sunday that authorities were seeking to locate an estimated 1,300 people still missing in the latest deluge in a summer that has seen China's worst seasonal flooding in a decade. That figure was down from 2,000 earlier in the day.

Worst hit was the county seat of Zhouqu in the province's Gannan Tibetan Autonomous Prefecture, where houses buckled and streets were filled with more than a yard of mud and water.

The devastation was worsened by flotsam that blocked the river upstream, creating a 2-mile-long lake that overflowed and sent waves of mud, rocks and water crashing down on the town, ripping houses from their foundations and tearing six-story apartment buildings in half.

Explosives experts were flying to the scene by helicopter to demolish the blockage and safely release potential flood waters ahead of more rain forecast through Wednesday.

China Central Television said 45,000 people had been evacuated, but the region's remote, mountainous location was hampering the emergency response. Narrow roads prevented the movement of heavy equipment, forcing rescuers to rely on shovels, picks and buckets.

Around China, the country's worst flooding in a decade has killed more than 1,100 people this year, with more than 600 still missing. The floods have caused tens of billions of dollars in damage across 28 provinces and regions.

In Pakistan, more than 1,500 people have been killed and millions more left begging for help following the worst floods in the country's history. Prices of fruit and vegetable skyrocketed Sunday, with more than 1 million acres of crops destroyed and at least 4 million people in need of food assistance in the coming months.

Pakistan has worked with international partners to rescue more than 100,000 people and provide food and shelter to thousands more. But the government has struggled to cope with the scale of a disaster that it estimates has affected 13 million people and could get worse as heavy rains lashed Pakistan again on Sunday.

At least 1.4 million acres of crops were destroyed in the central province of Punjab, the breadbasket for the rest of Pakistan, the United Nations reported. Many more crops were devastated in the northwest, where destruction from the floods has been most severe and many residents are still trying to recover from intense battles between the Taliban and the army last year.

Many flood victims have complained they have not received aid quickly enough or at all. The number of people needing assistance could increase as heavy rains continued to hit many areas of the country. The swollen Indus River overflowed near the city of Sukkur in southern Sindh province on Sunday, submerging the nearby village of Mor Khan Jatoi with chest-high water and destroying many of its 1,500 mud homes.

"We are sitting on the bank with nothing in our hands; no shelter, no food," said a flood victim in Sukkur, Allah Bux. "We are helpless and in pain."

The U.N. special envoy for the disaster, Jean-Maurice Ripert, said billions of dollars would be needed to help Pakistan recover, but funds could be difficult to procure amid the global financial crisis.

In neighboring India, rescuers dug through crushed homes and piles of mud searching for 500 people still missing after flash floods sent massive mudslides down remote desert mountainsides in Indian-administered Kashmir, officials said. The death toll rose to 132 with about 500 others injured.

The dead included at least five foreign tourists whose nationalities were not immediately known.

About 2,000 foreign tourists were in the area, a popular destination for adventure sports enthusiasts, when the storm hit, burying homes and toppling power and telecommunication towers.

However, South Korean Unification Ministry spokesman Chun Hae-sung said the damage did not appear to be serious compared to previous years. Flooding in North Korea in 2007 killed about 600 people, left another 100,000 homeless, and destroyed more than 11 percent of the country's crops.

Floods this year in the neighboring Chinese province of Jilin have left 85 people dead and caused an estimated 45 billion yuan ($6.6 billion) in economic losses.