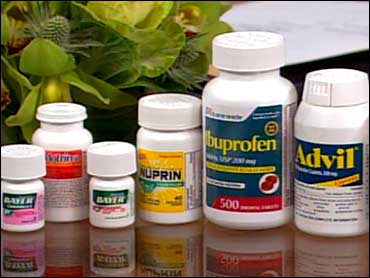 A new report says the heart-related benefits of taking aspirin can be offset if you take it too closely to when you take ibuprofen.

The Food and Drug Administration paper says people taking a low dose of aspirin each day for long-term protection against heart attacks and strokes can wipe out that protection if they take ibuprofen less than a half-hour after taking aspirin. It says the desired effect from aspirin also won't happen if you take it less than eight hours after taking ibuprofen.

On The Early Show Tuesday, medical correspondent Dr. Emily Senay pointed out that ibuprofen is the main ingredient in such over-the-counter pain relievers as Advil and Motrin.

It's been estimated by the manufacturer of Bayer aspirin that 28 million Americans take a small dose of aspirin every day, because it's been shown to help reduce a person's risk of heart attack and stroke.

The main way aspirin does it, Senay explained, is by limiting the blood's ability to form dangerous clots. But the FDA paper says aspirin's clot-fighting abilities can be cancelled out when aspirin and ibuprofen are taken too closely together.

But that, Senay noted, applies to when people take immediate-release aspirin.

Many people use a slower-release form of aspirin with what's called an enteric coating, because that form is considered less likely to irritate the stomach. There isn't enough research yet to know how ibuprofen interacts with the slower-release aspirin, Senay observed.

She adds this is yet another reminder that medications can interact badly, whether they're OTC, prescribed by doctors, or so-called natural remedies.

You should discuss whatever you take, from any or all of those categories, with your doctor, Senay stressed. You also should carefully read product labels and package inserts. In some cases, such as with aspirin and ibuprofen, one product can cancel out an important benefit you hope to get from the other. In other cases, two products that may help you separately could cause serious harm if you take them together.

If you take aspirin regularly to help protect your heart and are wondering, after reading this, whether there's any alternative to ibuprofen, Senay says that's unclear at the moment. A five-year-old study suggests that acetaminophen doesn't interfere with aspirin's clot-fighting properties. Products containing acetaminophen include Tylenol. The results appear less clear-cut for naproxen, the main ingredient in products such as Aleve.

But the best plan of all is to run that question by your doctor, Senay advised. He or she can assess the best approach for you based on your own medical history, and other medications you might be taking.

In fact, Senay continued, people should "absolutely" ask their doctors before trying aspirin in the first place as a way to protect their hearts. In certain people, the result of aspirin's effect on the blood isn't fewer clots, but excess bleeding, especially in the digestive tract. Also, your doctor can gauge just how much risk of cardiovascular disease you have to begin with. If your medical profile suggests little risk, then it may be a case of your taking a drug you really don't need, which you never want to do for any condition.