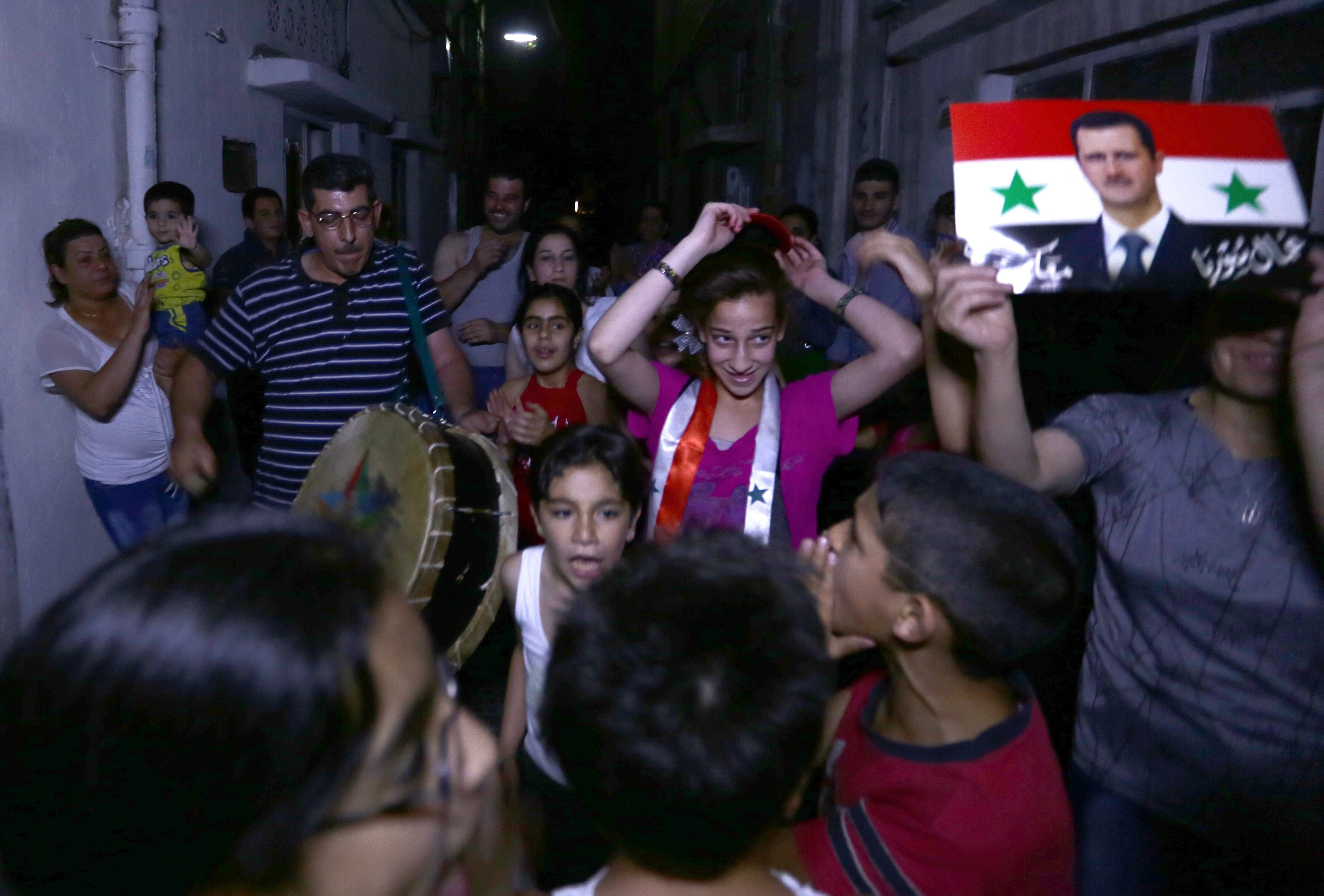 DAMASCUS, Syria -- Syrian President Bashar Assad has been re-elected in a landslide, officials said Wednesday, capturing another seven-year term in the middle of a bloody 3-year-old uprising against his rule that has devastated the country.

After the results were released, Damascus erupted into a thunderous, rolling clap of celebratory gunfire that appeared to include heavy weaponry. On the streets of the capital, men cheered and whistled. Some broke into the familiar pro-Assad chant: "With our souls, with our blood, we sacrifice for you, Bashar!"

Assad's victory was always a foregone conclusion, despite the presence of other candidates on the ballot for the first time in decades. Voting was held only in government-controlled areas, excluding huge tracks of northern and eastern Syria that are in rebel hands. The opposition and its Western allies, including the United States, have denounced the election as a farce.

One of the reasons Assad has survived this long is because he staved off U.S.-led strikes last summer by agreeing to hand over all of his banned chemical weapons materials, but recently, he appears to have found a loophole - attacking his own people with chlorine gas.

In some parts of Syria, the election began with barrel bombs, not ballot boxes, CBS News' Clarissa Ward reported. In regime-held areas, it was a dramatically different picture.

"I voted with my blood because I love our president and our country," voter Nahed Homsi said.

CBS News' George Baghdadi reports that in the capital Damascus, religious minorities and the business class many were eager to vote. Christians, who have seen churches and worshipers targeted by Islamic extremists, are also fearful that the crisis will take a fundamentalist turn. They usually side with Assad because they have been safe under his rule.

The win boosts Assad's support base, and provides further evidence that he has no intention of relinquishing power.

For the first time in decades, there were multiple candidates on the ballot. In previous presidential elections, Assad and before him his father, Hafez Assad, were elected in single candidate referendums in which voters cast yes-no ballots.

The government has sought to present this vote as a democratic solution to Syria's three-year conflict, although a win for Assad is certain to prolong the war. Much of northern and eastern Syria is in rebel hands, and those in the armed opposition show no signs of relenting in their fight to oust Assad.

The war, which activists say has killed more than 160,000 people, has left the international community deeply divided, with the U.S. and its allies backing the revolt against Assad, who enjoys the support of Russia and Iran.

That division persisted in perceptions of Tuesday's vote.

In Beirut, U.S. Secretary of State John Kerry sharply criticized the Syrian election, calling it "a great big zero." He said it can't be considered fair "because you can't have an election where millions of your people don't even have an ability to vote."

The European Union joined the U.S. in condemning the election, saying in a statement that "it cannot be considered as a genuinely democratic vote."

In Damascus, meanwhile, a delegation led by the government's chief international supporters said Syria's first multi-candidate presidential election in over four decades was transparent and free, and would pave the way for "stability and national agreement."

The delegation of officials from more than 30 countries, including legislators and dignitaries from Iran, Russia and Venezuela, toured polling stations on Tuesday. In a final statement read Wednesday by Alaeddin Boroujerdi, the head of the Iranian parliament's Committee on National Security, the delegation blamed the U.S and its allies for "crimes committed against the Syrian people."