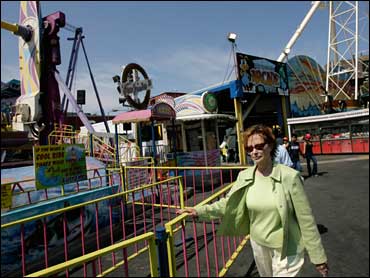 Once it was the largest amusement park in America, a playground for people crowded into the biggest city in the country.

It began life as a cluster of seaside hotels, but by the turn of the 20th century Coney Island was famous for it's firsts - the first American rollercoaster, the first hot dog. It was a corner of Brooklyn that became an icon, reports CBS News correspondent Michelle Miller.

Today most people know it only from movies that recreate its raunchy, raucous atmosphere. But for millions of New Yorkers, its boardwalk and beach were like a second home.

"My first job was when I was 13 years old," said Norman Kaufman, a former amusement park owner. "It was in a dark room on those machines. I would give you four pictures for a dime."

"It's sad to see it empty, you know what I mean?" said Kaufman. "It doesn't need to be empty."

"I think we will be bigger and better than any amusement, any entertainment venue anywhere in the United States of America," said Joseph Sitt of Thor Equities.

But the City of New York may call a halt to the project, worried that this middle income neighborhood will be turned into a playground for the rich. Even if this happens, it's unlikely Astroland can keep its lease.

Generations of kids were by turns thrilled and terrified at Astroland, Coney Island's largest amusement park. And although the 80-year-old Cyclone rollercoaster will stay, everything else will be history.

The new development will mean jobs and tourists and a revival for the area. But something will be lost.

"I think there's this special spirit to Coney Island, and you can't ever imagine that that's going to be recaptured," said Albert.

A magic that's made of neon lights and cotton candy and memories that last a lifetime.