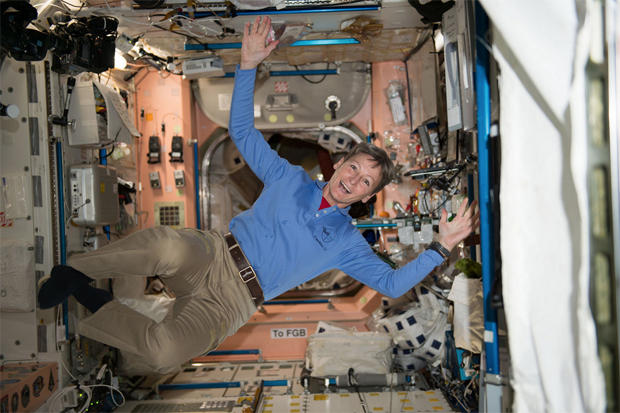 NASA and Roscosmos, the Russian space agency, have agreed to extend astronaut Peggy Whitson’s stay aboard the International Space Station by three months to enable uninterrupted research aboard the orbital laboratory during a period when Russia is temporarily reducing its crew complement, the U.S. space agency said Wednesday.

Whitson took off aboard the Soyuz MS-03 spacecraft on Nov. 17, along with spacecraft commander Oleg Novitskiy and flight engineer Thomas Pesquet, a European Space Agency astronaut. All three were scheduled to return to Earth June 2 to close out a 196-day mission.

Instead, Novitskiy and Pesquet will return to a landing on the steppe of Kazakhstan with one empty seat, leaving Whitson behind aboard the station with Soyuz MS-04 commander Fyodor Yurchikhin and NASA astronaut Jack Fischer, who are scheduled for launch from the Baikonur Cosmodrome on April 20.

Soyuz spacecraft normally carry three crew members to the station but the Russians have opted to reduce their crew size in the near term to save money. As a result, the MS-04 spacecraft will launch with an empty seat. Whitson will take that seat when she returns to Earth with Yurchikhin and Fischer on Sept. 3.

“This is great news,” Whitson said in a NASA statement. “I love being up here. Living and working aboard the space station is where I feel like I make the greatest contribution, so I am constantly trying to squeeze every drop out of my time here. Having three more months to squeeze is just what I would wish for.”

Between June 2, when Whitson’s two Soyuz MS-03 crewmates land, and the arrival of Ryazanskiy’s crew, the station will be staffed by one Russian, Yurchikhin, and two Americans, Whitson and Fischer. That will enable continued research operations in the U.S. segment of the lab that otherwise would have been curtailed if just one astronaut was available.

It also preserves the option for a contingency spacewalk if a major problem crops up with the U.S. segment of the station.

Whitson, who holds a doctorate in biochemistry, is one of NASA’s most experienced astronauts, making her third visit to the space station. She served as commander of the outpost during her second stay in 2008 and will serve as the lab’s next commander, after three current crew members -- Soyuz MS-02 commander Sergey Ryzhikov, Andrey Borisenko and Expedition 50 commander Shane Kimbrough -- land Monday to wrap up a 173-day mission.

Whitson also is the world’s most experienced female spacewalker with more than 53 hours of EVA time during eight spacewalks. Assuming a landing Sept. 3, she will have logged 289 days aloft since launch last November, pushing her cumulative total to a U.S. record 666 days over three missions. Former astronaut Scott Kelly holds the U.S. record for the longest single flight at 340 days.