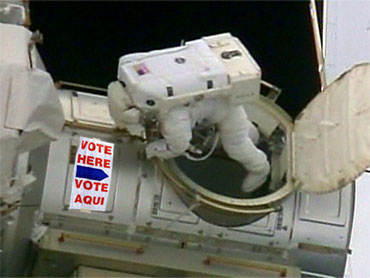 The three Americans orbiting the planet on Election Day have cast their ballots.

Kelly said Tuesday it was an "honor and a privilege" to vote from the International Space Station.

As for the six shuttle astronauts headed soon to the space station, they voted back home in Houston for the congressional elections before heading to NASA's Florida launch site last week.

Discovery is scheduled to lift off Wednesday.

Texas legislators passed a bill in 1997 allowing astronauts to vote from orbit. Space station residents have taken advantage of that many times since.