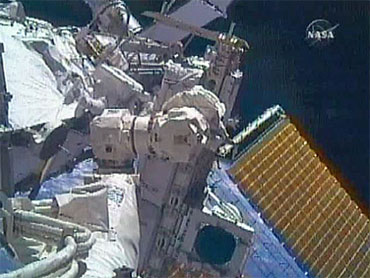 They even found time for a bit of sightseeing before returning to the International Space Station's Quest airlock module - marveling at the view of the Kennedy Space Center and Cape Canaveral from 220 miles up.

"Are we over, like, Bermuda or something?" Reisman asked.

"You can see the Cape if you look back the other way," Antonelli said.

"You can see it?" Reisman asked.

"And Houston, we've got the field in site," Antonelli joked.

"Houston copies. We'd rather you not land just yet," astronaut Steve Swanson replied from mission control.

"It was three great, fantastic EVAs," Swanson called at the end of the spacewalk. "We appreciate all your work."

This is the 10th spacewalk so far this year, and the 146th EVA devoted to station assembly and maintenance since construction began in 1998.

Four 375-pound batteries were installed during a spacewalk Wednesday and the final two were replaced today.

The six old batteries that were removed from the truss are now secured on a cargo carrier for return to Earth aboard the shuttle Atlantis. The carrier pallet will be mounted back in the shuttle's cargo bay Saturday.

Good, call sign EV-1, made the fourth spacewalk of his career, while Reisman, EV-2, made his third.

Along with replacing the batteries in the P6 solar array segment, a second major objective of Atlantis' mission was installing a new Russian module known as Rassvet, or mini-research module No. 1. The new compartment was attached to the Earth-facing port of the Zarya module Tuesday and opened up on Thursday.

Entering the module, Expedition 23 commander Oleg Kotov reported seeing what appeared to be metal flakes, or shavings, floating in the air, debris presumably shaken loose during launch. As always when opening a new module, Kotov was wearing goggles and a dust mask as a safety precaution.

"One thing that we did find were some metal flakes, or shavings, that were unexpected," Stover said. "In the one-G environment when it was on the ground you can imagine they hide in the nooks and crannies of the module itself. Now in zero G, they're floating around.

"When the crew entered, we were prepared for it, we made sure they were wearing the protective gear, goggles and dust mask," he said. "They reported seeing the metal flakes, so we had them make sure the (air) scrubbers were running."

The module's hatch was closed overnight and "hopefully the scrubbers will collect all of that debris," Stover said. "When we do go back in, we'll again have them wear the protective equipment just in case there's something floating around in the air."