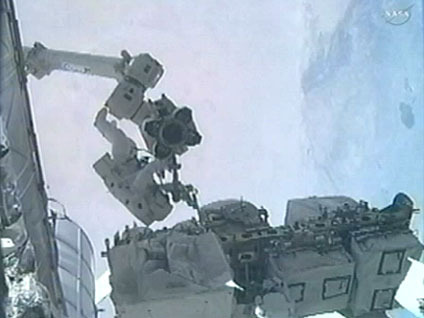 "Ronny, you ready to rock and roll?" Fossum asked before floating out of the airlock.

Fossum and Garan plan to accomplish their primary goal first, moving a failed ammonia pump module from a storage platform just outside the airlock to a carrier in the shuttle Atlantis' cargo bay. After that, the astronauts will move a robotic refueling demonstration apparatus from the shuttle to the station, install a materials science space exposure experiment and perform a few maintenance chores.

This is the 160th spacewalk devoted to station assembly and maintenance since construction began in 1998, the ninth so far this year, the seventh for Fossum and the fourth for Garan.

For identification, Fossum (call sign EV-1) will be wearing a suit with red stripes around the legs. Garan (EV-2) will be in an unmarked suit.

Shuttle pilot Douglas Hurley and Sandra Magnus will operate the station's robot arm during the excursion and shuttle flight engineer Rex Walheim will serve as the spacewalk coordinator, working from the flight deck of Atlantis.

Hurley and Magnus will use a robotics work station in the Tranquility module's multi-window cupola. A U.S. toilet also is located in Tranquility, along with equipment used to recover water from urine. The astronauts reported a strong odor from the equipment Monday and the urine processor will not be turned on during today's spacewalk.

"There are two toilets on the space station," said overnight Flight Director Courtenay McMillan. "There's one in the Russian segment, and it's working fine. And there's one, basically the same design, that's in the U.S. segment and it hooks up to our urine processor. So we got a report from the crew that there was a smell that was unexpected coming from that area, and it was pretty intense.

"At the time, we were processing urine in the urine processor, not the toilet itself, but the machine that it hooks up to recycle the water from the urine. We got some air in that system a little while ago and it needs to basically purge itself out over the course of processing. So we think, because everything looks fine in the system, we think it's just working its way out of the system. So we stopped the urine processing for the time being and we're using the toilet basically in stand-alone mode right now."

Flight controllers likely will resume urine processing Wednesday but "not while the crew is doing EVA support,:" McMillan said. "They'll be using the robotics work station in the cupola, which is in the vicinity of the toilet, so we don't really want to be making a smell while they're working in there."

Today's spacewalk is the first during a shuttle visit that will be carried out by space station personnel. Because of a short training flow and a requirement to launch Atlantis with a reduced crew of four, "we wanted to off load the training tasks on the shuttle crew and sort of level the load," lead station Flight Director Chris Edelen said before launch. "So we took advantage of the EVA experience of Mike Fossum and Ron Garan. They've actually done three spacewalks together on previous shuttle missions (and they) were able to get up to speed very quickly on this EVA."

Fossum has 42 hours and one minute of EVA time in his previous six spacewalks while Garan has 20 hours and 32 minutes of EVA experience.

Returning the failed ammonia pump module is a high priority objective for NASA. The space station is equipped with two coolant loops that circulate ammonia through huge radiators to get rid of the heat generated by the space station's electrical systems. Last July 30, the pump in one coolant loop failed, forcing the crew to implement an emergency powerdown.

"I remember it because I was on console when it failed," Edelen said. "It was one of those moments where on a quiet Saturday and the crew's off duty and getting ready to go to bed and everything's going real well and it all changed in a second when that pump module failed. All the caution and warnings started going off and the crew had to very quickly scramble to reconfigure the systems and power down some of the systems in order to keep the station limping along on one remaining cooling loop.

"That was a major failure in the history of the space station program, the first major failure that required (U.S.) spacewalks without a shuttle present to fix a problem."

Over the course of three spacewalks, the pump module was successfully replaced by a pre-positioned spare. But the coolant system is critical to the station's long-term health and engineers want to find out what went wrong in the pump that failed. After troubleshooting, engineers plan to repair the pump and re-launch it aboard a Japanese cargo ship.

After mounting the pump module in Atlantis' payload bay, Fossum and Garan plan to move an experimental robotic refueling apparatus from the shuttle to a storage platform used by the Canadian Special Purpose Dexterous Manipulator, or SPDM, a robot arm extension also known as DEXTRE.

"We are taking up a payload, it's called the robotics refueling module, this is to demonstrate a capability for the Special Purpose Dexterous Manipulator, which hasn't seen a whole lot of use on the International Space Station to date, but we hope to turn that all around with this payload," said shuttle commander Christopher Ferguson.

"I've kind of likened it to a Fisher-Price play toy for a robot. And I don't mean that in a negative sense, it is really an opportunity for the SPDM to get in there and use several different tools and prove the capability to do something extremely novel, and that is to refuel satellites in orbit that were never designed to be refueled.

"So the manipulator will actually go in and pick up special cutter tools and cut safety wire, it has a drill that can actually drill into a fuel tank so there's some very unique capabilities that will be demonstrated using this. What capability will robots provide to us in the future? To think about going out there and perhaps grappling a satellite that was never designed to be refueled ... and refill it and use it for an additional five or 10 years is a dramatic example of how robotics can modify what we're doing in space."

Along with moving the pump module to Atlantis and installing the robotics refueling kit on the station, Fossum plans to inspect a robot arm mounting fixture on the Russian Zarya module to re-position a grounding wire that appears to be caught in an access door. Both spacewalkers then will install a thermal shield over an unused docking port attached to Tranquility before heading back to the Quest airlock.