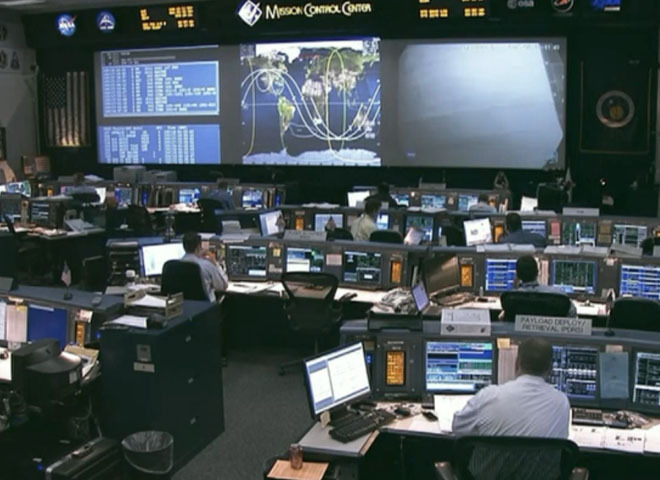 "On this, the last shuttle mission of the program, I'm very grateful the spacecraft is behaving as well as it is so we can finish strong, finish safely," he said. "My team's number one focus is on ending this mission and ending the program as safely as we have flown past missions. The great condition of the spacecraft is really helping us to do that so far."

Space shuttles normally fly with crews of six or seven, but just four are flying aboard Atlantis - commander Christopher Ferguson, pilot Douglas Hurley, Sandra Magnus and Rex Walheim - to minimize rescue scenarios in case of a major problem that might prevent a safe re-entry.

But on the flip side, there are fewer hands available to do the same amount of work.

"It will be challenging to get through that inspection with a reduced crew complement," said Alibaruho said before launch. "But this crew has practiced considerably to be able to develop a flow or a routine, if you will, to where even though they have fewer hands available in the shuttle they'll be able to get through these inspections in the timeframe that's been allotted."

The crew did better than that, finishing well ahead of schedule.

The goal was to inspect the shuttle's heat-resistant nose cap and wing leading edge panels, which experience the most extreme heating during re-entry, to make sure no damage was incurred during launch Friday. Using an instrumented boom attached to the end of Atlantis' 50-foot-long robot arm, the astronauts inspected the right wing first, followed by the nose cap and then the left wing.

"We did not see anything so far that gave us great pause, nothing that was immediately visible to the naked eye," Alibaruho said after the inspection was complete. "Now of course, the process of analyzing the data we get from the sensor package on the OBSS (orbiter boom sensor system) takes several hours and we do expect that process to go normally. So we'll hear official word concerning the condition of the reinforced carbon components of the thermal protection system, we'll probably hear that late tomorrow, maybe early in the morning depending on how the engineers are doing. But there was nothing that immediately gave us pause or that we were concerned about going into the inspection."

Based on a preliminary assessment of photographs and video taken during Atlantis' climb to space Friday, "we also saw very good debris performance from the tank on the way up hill," he said. "That also was very encouraging to us. We were extremely happy with the launch yesterday as you can imagine."

All in all, he said, "this is certainly one of the better starts (to a shuttle mission) that we have seen."

"The absence of anomalies also equals the relative absence of distraction," he said. "Even though we haven't had really serious problems with the shuttle in a while, when you do have the random heater failure, a sensor bias, or some other little thing, we go through a fairly rigorous process to try to ... make sure they are not symptoms of more serious problems.

"So examining every failure or every anomaly we have does take a considerable mental resources on the part of our flight control team. The relative absence of that, I think, has allowed our team to focus more on executing the nominal timeline."

Along with the heat shield inspections, Ferguson and Hurley the first of two rendezvous rocket firings early Saturday to refine Atlantis' approach to International Space Station and planned a second later in the day. The astronauts also planned to check out the rendezvous tools that will be used during final approach to the station Sunday.