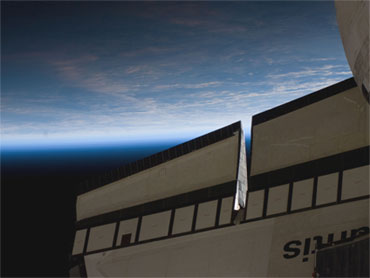 Working at the robotics work station inside the station's multi-window cupola, Sellers and Reisman began moving the integrated cargo carrier back to the shuttle completed the operation at 5:50 a.m., writes CBS News space analyst Bill Harwood.

For launch, the shuttle was loaded with a backup Ku-band dish antenna, an 8-foot antenna boom, an equipment storage platform and six new batteries to replace outdated power packs in the station's far left solar array.

The antenna, its support boom and the equipment platform were moved to the space station during a spacewalk Monday. The new batteries were installed during spacewalks Wednesday and Friday and the old batteries were bolted to the ICC for return to Earth.

"The shuttle crew has mainly got all their eyes on the robotics and what's happening there," said space station Flight Director Scott Stover.

"Additionally, both shuttle and station crew will be cleaning up all the EVA tools and equipment. Some of that equipment has to come back on the shuttle, including some of the suits, so we're going to be transferring a lot of that from the space station airlock back over to Atlantis.

"At the same time, we've got some stage EVAs coming up, probably in July, so we have to make sure the space station airlock is in a good config, so whenever we go out the door in July, we're ready to go.

After answering video questions from school kids at 7:40 a.m., the combined 12-member shuttle-station crew planned to share a joint meal at 8 a.m. The Atlantis astronauts looked forward to two-and-a-half hours of off-duty time starting at 11:05 a.m., with crew sleep on tap at 4:50 p.m.

Atlantis is scheduled to undock from the International Space Station around 11:22 a.m. ET Sunday.