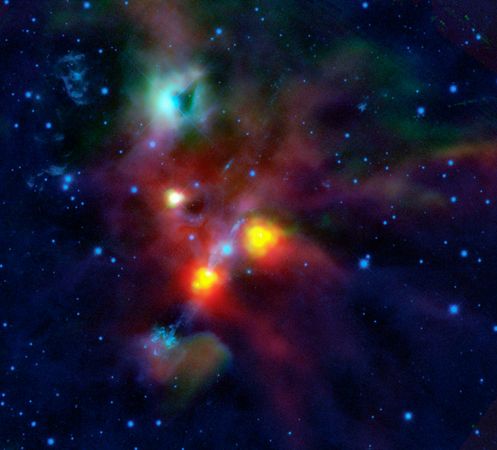 An orbiting space telescope, sent into the heavens one year ago by the European Space Agency, has found a dark spot near some young stars that astronomers believe is a hole in space.

When the first pictures of a nebula that goes by the name of NGC 1999 were released in late 1999, astronomers reviewing the findings initially thought they were looking at images of a dense and dark patch of gas and dust that prevented visible light from passing through. But using the Herschel Space Observatory infrared space telescope" they have now concluded that the area was black because it was "truly empty."

"No one has ever seen a hole like this," says team leader Tom Megeath, of the University of Toledo. "It's as surprising as knowing you have worms tunnelling under your lawn, but finding one morning that they have created a huge, yawning pit."

The surprise discovery offers astronomers an unexpected look at the end of the star-forming process. In announcing the finding, ESA's Herschel noted that while astronomers have been able to identify jets and winds of gas emating from young stars previously, "it has always been a mystery exactly how a star uses these to blow away its surroundings and emerge from its birth cloud. Now, for the first time, Herschel may be seeing an unexpected step in this process."

The thinking now is that the hole announced earlier today got opened when young stars nearby launched narrow jets of gas which broke through the sheet of dust and gas that forms NGC 1999.

Speaking with National Geographic, said scientists believe the star was sending out "a bipolar jet at hundreds of kilometers per second that is punching a gigantic hole in the surrounding cloud." The resulting bolts of gas, he said, "are being shot forward and are sweeping away all the gas and dust."

I later caught up with Megeath via email, who underscored that the real story here was less about a black hole (the remnant of dead stars), and more about a "prosaic kind of hole" in a cloud of gas-forming stars.

"Young stars form in giant clouds of very cold gas (containing many times the mass of our sun and being many light years in length). Pieces of dense material in the cloud collapse through gravity and begin to form a star," he wrote. "These young stars "kick back" by launching powerful jets of gas traveling at 100 of miles per second. These jets, we think, eventually rip apart the clouds and stop further star from forming. What we are seeing here is a beautiful example of this process: a large hole has been opened up in the cloud by these jets and then the edges of the hole are lit up by the young star (like a light lighting up a lampshade)."