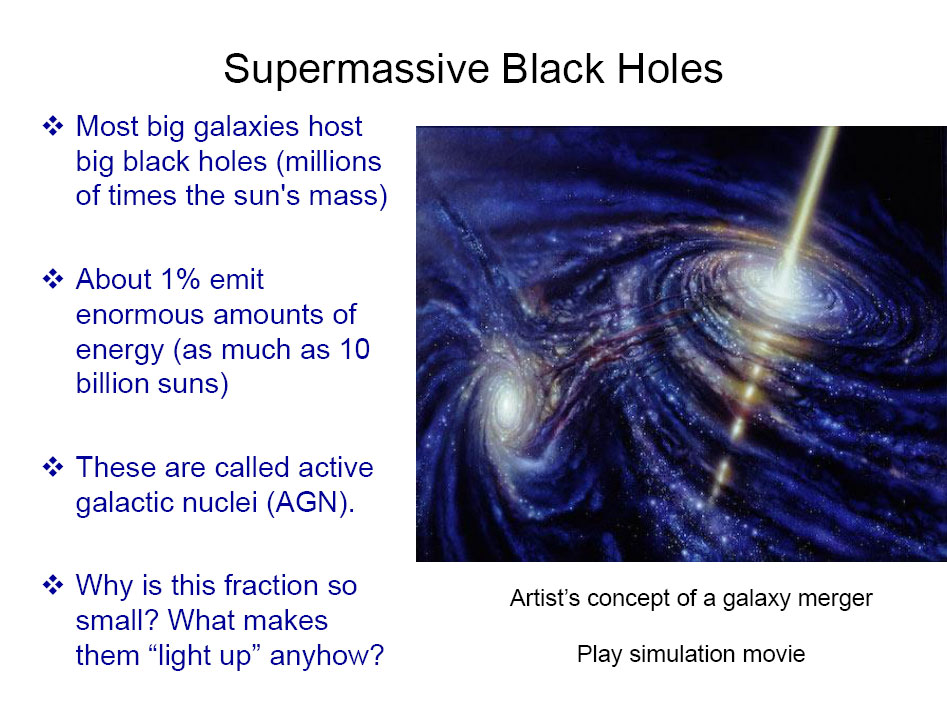 Turns out that not all black holes are created equal.

Astronomers have long wondered why some black holes - roughly one percent - emit vast amounts of energy - as much as 10 billion suns. Now NASA astronomers have come up with a theory about these active galactic nuclei (or AGN). Actually, it's a confirmation of a theory they harbored; based on data collected by NASA's orbiting Swift satellite, scientists now trace the answer to the collision and merger of different galaxies.

"Theorists have shown that the violence in galaxy mergers can feed a galaxy's central black hole," said Michael Koss, the study's lead author and a graduate student at the University of Maryland in College Park. "The study elegantly explains how the black holes switched on."

During a press conference they held Wednesday afternoon, the scientists announcing the discovery noted that about 60% of active galaxies are fated to undergo mergers with other galaxies. But talk about the long term - this process will take place over the next billion years.

In a statement, NASA described what it called a smoking gun of black hole activation, referring to the "intense emission from galaxy centers, or nuclei," near a supermassive black hole as containing "between a million and a billion times the sun's mass." The mergers were detected by observing the distortion of galaxy shapes, which change as they destroy each other and thus feed the black star.

The full findings are published in the 20 June issue of The Astrophysical Journal.

Below is a simulation of what astronomers believe transpires when a couple of galaxies that contain black holes collide with each other.