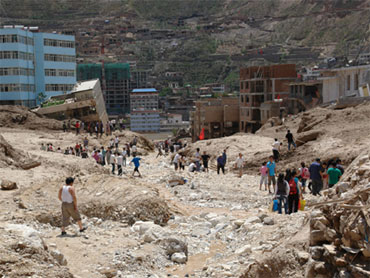 Half of an entire town was under water and an estimated 2,000 more people were missing in the latest deluge in a summer that has seen China's worst seasonal flooding in a decade.

Terrified residents fled to high ground or upper stories of apartment buildings after a debris-blocked river overflowed during the night in the northwestern province of Gansu.

Worst hit was the county seat of Zhouqu in the province's Gannan Tibetan Autonomous Prefecture, with the official Xinhua News Agency reporting half of it under water.

Many houses collapsed and streets were covered with a yard of mud and water after the early morning landslides, it said.

The landslides struck after heavy rains lashed the country late on Saturday and the Bailong River overflowed, Xinhua quoted the head of Zhouqu county, Diemujiangteng, as saying,

CCTV said the death toll in the province was at least 127, with about 2,000 people missing.

Power, water and communications were cut in affected areas in the southern part of the province, about one-third of whose residents are ethnic Tibetan, and it was not known how many of the missing were in danger or simply out of contact.

The devastation was worsened by the blockage of the river upstream, which created a 2-mile-long lake that overfilled and sent massive waves of mud, rocks and water crashing down on the town, ripping houses from their foundations and tearing six-story apartment buildings in half.

Explosive experts were flying to the scene by helicopter to demolish the blockage and safely release potential flood waters.

Tents, boxed meals and medical supplies were being rushed to the area, where more rain was forecast through Wednesday.

CCTV said 45,000 people had been evacuated, but the region's remote, mountainous location was hampering the emergency response.

Heavy equipment could not be brought along the narrow access roads, forcing rescuers to rely on shovels, picks and buckets, while scattered stones either barred the way or caused tires to rupture.

The Lanzhou Military Area Command in the provincial capital dispatched 2,400 soldiers to help with rescue efforts.

More than 1,000 firefighters and militia members from the surrounding area were also being sent to aid relief efforts, Xinhua said.

Around China, the country's worst flooding in a decade has killed more than 1,100 people this year, with more than 600 still missing.

The floods have caused tens of billions of dollars in damage across 28 provinces and regions.

Overall this year, about 875,000 homes have been destroyed, 9.61 million people evacuated, and 22 million acres of crops ruined, according to the government's flood control office.